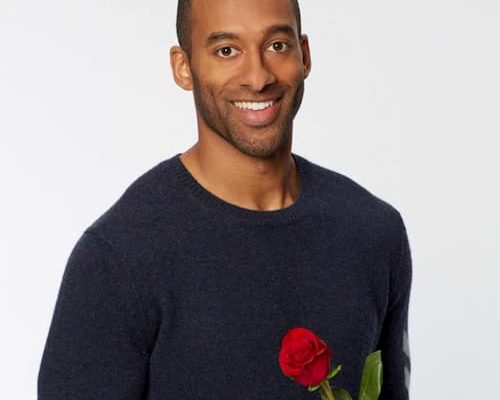 Matt James is an associate at CBRE commercial real estate and founder of ABC Food tours. He has been chosen as The Bachelor season 25 becoming the first black lead for the franchise. He was set to be a contestant on Clare Crawley’s upcoming season of The Bachelorette.

James stands at a height of 6 feet 5 inches tall.

Matt was brought up by a single mother known as Patty James in Raleigh, North Carolina.

He has a Bachelor’s Degree majoring in Economics from Wake Forest University.  While in high school he played football and was offered scholarships from Syracuse and the University of Kentucky, but he wanted to stay in his mother’s orbit so she could see his games. he decided to join Wake Forest.

“I saw Wake Forest and just fell in love with it. Other than becoming a Christian, coming to Wake Forest was the best decision I ever made.”

Matt played both basketball and football while in high school but after joining college he choose football. He says basketball actually left him with more injuries than the tally of bones broken by football: he was redshirted his freshman year at Wake Forest and missed 16 games in three years with a broken collarbone, a separated shoulder and a broken hand.

During the 2014 season finale against Duke, he had nine receptions and 87 yards in his best game. He gave himself a year to make it in the NFL, but he didn’t make the cut with the Carolina Panthers and was cut, called back and cut again by the New Orleans Saints.

According to his LinkedIn account, Matt joined CBRE in October 2017 as a researcher and later became an asset manager and currently serves as an associate. He began his career as a broker assistant at Davenport & Company LLC and later joined Merrill Lynch dor the same position.

In June 2014 he became a social media strategist for Morgan Stanley for two months before joining Verger Capital Management LLC as a junior analyst.

In February 2016 he joined PNC as a corporate & institutional banking analyst in Greater Pittsburgh Area. When he moved to New York City he joined Mic as a media planner.

Matt is the founder of ABC Food tours, a touring company that leads students on both food/fitness tours through NYC stopping at restaurants native to the area to taste their signature dishes and learn about their history. They partner with schools to provide tours for students that are directly affected by homelessness at no cost to them.

The announcement was made on Good Morning America through a statement by ABC which read; “We know we have a responsibility to make sure the love stories we’re seeing onscreen are representative of the world we live in, and we are proudly in service to our audience. This is just the beginning, and we will continue to take action with regard to diversity issues on this franchise. We feel so privileged to have Matt as our first Black Bachelor and we cannot wait to embark on this journey with him.”

Matt was set to be a contestant on Clare Crawley’s upcoming season of The Bachelorette. The Bachelorette was put on hold in March as a way of coronavirus precautions, just ahead of the night she was supposed to meet her group of men.

After he was chosen to be the bachelor he told Good Morning America that he was disappointed he wouldn’t get to meet Crawley, but said he’s excited to take on the Bachelor role.

James is a best friend of Tyler Cameron, who was a contestant on Hannah Brown’s season of The Bachelorette. The two are also roommates and business partners and run ABC Food Tours, a nonprofit that takes kids from underserved elementary schools to restaurants in their local communities. The two first met in college when they were both playing football at Wake Forest University in Winston-Salem, North Carolina.

In 2019 Tyler had joked to PEOPLE when asked who he would choose to be the next Bachelor he said he can’t wait to watch Matt next year.

“I can’t wait to watch him next year…I know my mom signed him up.”

They say if you want to go somewhere fast, go alone. If you want to go somewhere far, go with someone… Just got done running a 5k this morning with Matt. Ran my best times due to being pushed by a partner. I encourage you guys to move today and move with someone! Make each other better! Going to be dropping the date, time, and location for our next group date run tonight! Looking forward to running with you all again! Have a blessed Sunday #Myler

James is a friend of Hannah Brown, a former Bachelorette and Cameron’s ex. After the announcement that he will be The Bachelor, Hannah reacted in her Insta stories; “What the heck?! Matt James is the Bachelor. I could not be more excited. Y’all should be so freaking excited because he’s, like, the best human being in the entire world. …Y’all, this is amazing.”

She also posted a photo of James’ official Bachelor photo with the caption; “I’ve never been more excited about a lead being announced in this franchise.”

Thanks to @americanexpress and @delta, not only can I skate through boarding lines at the airport with Main Cabin 1 priority boarding, but I am able to grow my business along the way. . #ad My @delta SkyMiles Gold Card from @americanexpressbusiness makes business travel easy with benefits like 2x miles for every dollar spent on U.S. advertising purchases in select media. . Terms apply. Learn how at my #linkinbio. #AmexAmbassador #DeltaAmex