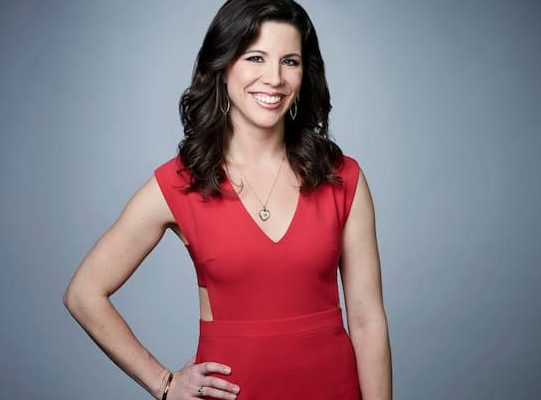 Mary Katharine Ham is an American journalist and author serving as CNN political commentator and senior writer at The Federalist. She appears regularly on “The Lead w/ Jake Tapper,” “Inside Politics,” and “State of the Union.” She is the author of the 2015 book, “End of Discussion: How the Left’s Outrage Industry Shuts Down Debate, Manipulates Voters, and Makes America Less Free (and Fun!)”.

She is the daughter of Jon Ham, who was also a journalist who worked for The Herald-Sun newspapers in Durham, N.C., for 19 years, 13 of those as managing editor and four as director of digital publishing.

He later joined the John Locke Foundation as vice president for communications and publisher of the Carolina Journal until he retired in August 2016.

She hasn’t revealed the name of her mother but she posts her on her social media accounts.

She has two brothers, although their names are unknown.

Mary was married to Jake Brewer from 2011 until his death on September 19, 2015. The couple met in 2009 on a media and politics panel at Google’s D.C. office. They spent their honeymoon climbing Mount Kilimanjaro.

Jake was an American White House aide, immigration activist, and liberal commentator. At the time of his death, he was working as a senior policy adviser in the Office of Science and Technology at the White House. Prior to joining the White House, he worked as director of external affairs at Change.org.

Jake died in September 2015 after being involved in an accident while participating in the 160-mile Ride to Conquer Cancer event from the capital city to Mount Airy, Maryland. He lost control of his bike in a sharp curve, riding into the path of an oncoming vehicle.

In an Instagram post to confirm his death, Ham wrote; “We lost our Jake yesterday, and I lost part of my heart and the father of my sweet babies. don’t have to tell most of you how wonderful he was. It was self-evident. His life was his testimony, and it was powerful and tender and fierce, with an ever-present twinkle in the eye. I will miss him forever, even more than I can know right now.”

Ham and her later husband had two daughters together, Georgia Brewer and Garnet J. Brewer. At the time of her husband’s death, she was seven months pregnant with their second child.

Mary got remarried to Steve on March 7, 2020. She tweeted, “Two years later, I met Steve and about two years after that, we were married, on March 7 of this insane year. It was the last possible weekend one could get married before the world went crazy. One last great guilt-free party in paradise! My daughters were our flower girls.”

The couple had gotten engaged in October 2019.

Katherine joined CNN in March 2016 where she serves as a political commentator. She appears regularly on “The Lead w/ Jake Tapper,” “Inside Politics,” and “State of the Union.” Prior to joining CNN.

She began her career at The Daily Journal where she wrote mainly features and sports stories — covering baseball, softball and NASCAR, prior to the Rockingham Speedway’s first downfall. She later rose to the level where she covered Friday night football. During her tenure she won two North Carolina Press Association awards — third place for news feature writing in 2002 and second place for sports columns in 2003.

She however revealed she went to journalism as a family tradition, as her father was a journalist, but it stuck.

“The family tradition was part of my decision-making process, but I wasn’t sure it would stick. I went into journalism because I knew it was something I could do straight out of college to learn a few things, get some experiences under my belt, and pay some bills. Turns out, it stuck.”

After leaving the Daily Journal she joined Heritage Foundation, a conservative think tank, where she served as an editor of a policy magazine. She created the Heritage Foundation’s first blog in 2004 and began writing for TownHall.com, an aggregate website for conservative thought, in 2005. While at TownHall, she started the award-winning video blog series “Ham Nation.” She later wrote for the Weekly Standard.

In late 2006 she made her first appearance on CNN as a fill-in. In June 2008 she become a paid contributor for Fox News making appearances on “America’s Newsroom,” “Your World” with Neil Cavuto and “The O’Reilly Factor.” While at Fox she made conservative headlines after a “knock-down, drag-out” with host Bill O’Reilly over marijuana legalization — O’Reilly being against the efforts, Ham in support. She left Fox in October 2015.

She has also been a guest c0-host on “The View” and a panelist on “Real Time with Bill Maher.”

She is a senior writer for The Federalist since February 2016.

Mary and Guy Benson,  are co-authors of ‘End of Discussion: How the Left’s Outrage Industry Shuts Down Debate, Manipulates Voters, and Makes America Less Free (and Fun)’. The book chronicles the rise of trigger warnings, microaggressions, safe spaces—what they called exaggerated claims of offense as a means of silencing debate.

Ham said they began planning the book following the forced resignation of Mozilla co-founder Brendan Eich because of his donation to efforts in California to ban same-sex marriage.

Mary was a guest co-host on The View as they search to find Meghan McCain replacement.

She has an estimated net worth of $ 1 million.