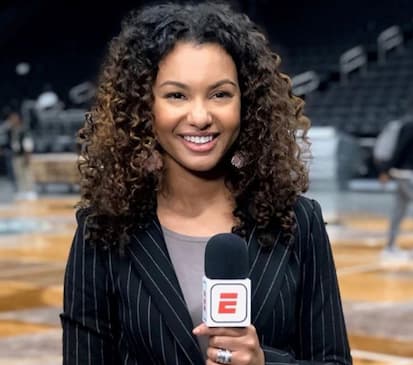 Malika Rose Andrews is a sports journalist and reporter in the United States. She is the host of NBA Today, a show that has taken the position of The Jump.

She worked for The Beacon, the school newspaper, as a sports journalist, sports editor, and editor-in-chief while at the University of Portland. She reported on a player who had a brain hemorrhage after colliding with a wall while at school. Following the publication of her account in the newspaper, the school installed padding in order to prevent further injuries.

She stands at a height of 5 feet and 4 inches

She is a beloved daughter to Mike Andrews, a personal trainer, and Caren Andrews, an art teacher. Andrews is descended from a Jewish family through her mother, and she celebrated her bat mitzvah in 2008.

She is a sister to Kendra Andrews.

She is single and not dating anyone yet.

She has no known kid yet.

Malika is an NBA Reporter and the host of NBA Today (2021), ESPN’s daily NBA studio show. It covers the league nationally. She joined ESPN as an online NBA writer in October 2018. She made her debut as the network’s youngest sideline reporter for a telecast during the 2020 NBA Bubble. Her work has appeared on ESPN.com, SportsCenter, and ESPN Radio, among other ESPN properties.

Additionally, Andrews was one of the first reporters on the ground to report from the NBA’s makeshift Florida campus. This followed the league’s decision to restart play after a four-month halt due to the COVID-19 epidemic. She was designated one of Forbes’ 30 Under 30 in the sports business for 2021 as the network’s only black female NBA reporter. She, later on, worked as a correspondent for the Chicago Tribune for a year before joining ESPN in October 2018.

Moreover, Malika spent a year as a James Reston Reporting Fellow at The New York Times’ sports department before joining the Tribune. Traveling to Lake Tahoe as part of a team of journalists that rebuilt the events between Donald Trump and Stormy Daniels was a highlight of her media career. Along with that, she also discussed the horse industry’s role in the Sonoma County wildfires in the fall of 2017. Andrews has also covered a Super Bowl and investigated the impact of the Larry Nassar sexual assault case on children’s gymnastics.

She earns a salary of approximately $87,000 annually.