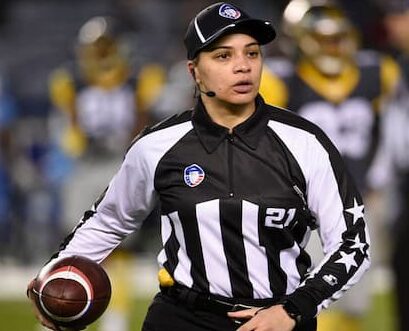 Maia Chaka is an NFL officiating Referee and Health and Physical Education teacher. She is the first Black woman to officiate an NFL game after working as a line judge for the Jets-Panthers game on September 12, 2021. She is also the third on-field female NFL official, joining Sarah Thomas and Shannon Eastin.

Maia has a bachelor’s degree in Health and Physical Education K-12 from Norfolk State University.

She is the daughter of Terry L Chaka and Gerald Chaka. She has a younger brother known as Anwar Chaka.  Her father owned a 3,000-square-foot bookstore on Thurston Road in the 1980s and ’90s. She has credited her parents for teaching her to work for everything she wants.

“My father was an absolute go-getter. I watched him set up shop in our living room, and he almost built an empire. After school, I would come home and work at the store. My parents taught me at a young age that you got to work for everything you have.”

Maia has managed to keep her personal life private. Her marital status is unknown.

She belongs to the Afro-American ethnicity.

On March 5, 2021 Maia was named the first Black female official in the NFL she had been training with the league since 2014, before that she refereed college football games.

She became the third on-field female NFL official, joining Sarah Thomas and Shannon Eastin. Sarah also made history after she became the first-ever female to referee at the Super Bowl in February 2021.

On September 12, 2021 Maia became the first Black woman to ever officiate an NFL game. She worked as the line judge in Sunday’s Week 1 matchup between the Panthers and the Jets.

In a social media post, she said; “This historic moment to me is an honor, and it’s a privilege that I’ve been chosen to represent women and women of color in the most popular sport in America, proving that I can defy the odds and overcome and pretty much master a craft of a sport that I didn’t really play but I have a love and a passion for and hopefully that just gives somebody else, you know, some inspiration and empowers them to step outside the box and do something different.”

Prior to joining NFL, she worked with the Pac-12, Conference USA and the XFL. In 2014, she was selected for the NFL’s Officiating Development Program — which identifies talented officials working in college and helps give them exposure and experiences like league referees.

Chaka worked as a health and physical education teacher for students with unique needs at Renaissance Academy in Charlottesville, Virginia, since 2006. until June 2021. At the school, she sponsored a mentorship club for girls and won a Teacher of the Year award multiple years ago.

While at Edison Tech High School Chaka played basketball as a guard but she suffered from what she described as the “senior blues,” which led to a lack of attendance for a morning chemistry class. This resulted to her joining summer school to graduate, which impacted her chances of playing college basketball. In the aftermath, Maia decided to take off a year after high school, opting to work two full-time jobs at The Marketplace mall.

It is not clear how much Maia is paid as an officiating NFL referee but according to the expired NFL CBA NFL referee earns an average of $205,000.