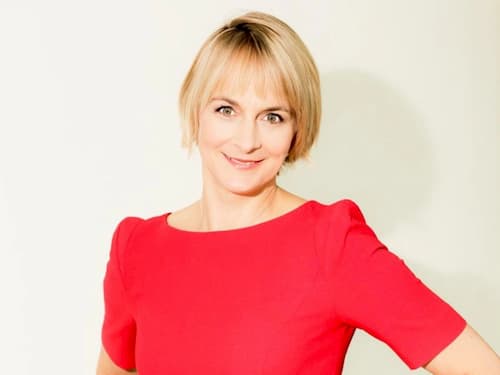 Louise  Mary Minchin is a British media personality who worked as a BBC presenter and journalist until September 2021. She co-anchored BBC Breakfast alongside Dan Walker and also guest-hosted The One Show.

Minchin attended  St Mary’s School, Ascot before joining the University of St Andrews where she graduated with a degree in Spanish. She subsequently studied journalism at the London College of Communication.

Minchin is the daughter of a British Army Officer. Her father served as the Major of the Irish Guards regiment. She was originally named Louise Mary Grayson. Not much is known about her parents and it’s also not known if she has any siblings

Louise is married to David Minchin who is a restaurateur. The two got married on June 6, 1998, in a tiny Hampshire church with only fifty people in attendance.

Minchin and her husband have two daughters Scarlett and Mia.

Minchin joined BBC as a freelance presenter in 2006. She worked for the Latin American section of the BBC World Service during a year in Argentina, the Today programme, Five and various local radio stations. In 2006 she toured the country in a converted bus meeting England fans as part of the World Cup coverage for BBC News.

She also worked for Radio 5 where she presented many of the station’s main programmes, including Drive and Breakfast. Between September 2003 and April 2012, she was a regular BBC News Channel presenter, initially working alongside Jon Sopel from 7 pm to 10 pm. Minchin then presented the 2 pm to 5 pm slot, also with Sopel, sharing this shift with Emily Maitlis. She was also one of the main relief presenters for the BBC News at One until April 2012.

In 2006 and 2007, Minchin was a relief presenter on BBC Breakfast while Kate Silverton covered for the main anchor Sian Williams. After Williams returned, she continued to co-host the programme, and from May 2009 until April 2012 was the regular weekend presenter of the show.  In December 2011 the BBC announced that Minchin would replace Williams as the main presenter of BBC Breakfast along with Bill Turnbull and Charlie Stayt when the programme moved to Salford—the first edition was presented on Tuesday 10 April 2012.

From 21 April 2008 Minchin presented a weekday programme called Missing Live along with Rav Wilding. The programme was shown at 9:15 am after BBC Breakfast on BBC One and ran for 4 weeks. The show returned for a second four-week run from 16 March 2009, and again in March 2010, highlighting both new cases and those previously featured with updates.

Minchin and Colin Jackson presented the Sunday morning show Sunday Life on BBC One in 2008. From 2 November 2009, she presented four weeks of live broadcasts of Real Rescues along with Nick Knowles. She also presented In the Know, a BBC sports magazine programme on Saturday mornings on BBC One during the 2004 Athens Olympics alongside co-presenter John Inverdale.

In April 2010 Minchin co-presented The One Show for a week alongside Chris Hollins while regular hosts Adrian Chiles and Christine Bleakley were unavailable. She covered again when the show returned in July 2010 for two weeks alongside Matt Baker and one episode with Matt Allwright.

Minchin and Gethin Jones presented the documentary series Crime and Punishment, which began on BBC One on 12 March 2012. For a time from November 2012, Minchin was a co-presenter of Radio 5 Live’s Drive programme with Peter Allen. She often stands in as the main presenter of BBC Radio 4’s daily consumer programme You and Yours.

On September 15, 2021 Louise did her last broadcast on BBC after almost 20 years. She joined BBC in 2001 as a freelance presenter and journalist before becoming a regular anchor in 2006. She had announced her exit back in June while on air.

“I’ve loved being part of it, but – there is a but – I’ve decided that it is time that I stop setting my alarm for 3.40 – sometimes if I’m feeling really rebellious 3.46 in the morning – and I’m going to be leaving the programme. It’s not going to be for a while,” she continued. “But before anything else, I wanted to thank everybody who is watching for your loyalty and support over all these years. I have absolutely loved being part of it and I will really miss it but it’s time now to stop that alarm early in the morning. Thank you for watching all these years.”

During an interview with the Mirror, she said the move was long time coming and is looking forward to spending time with her family.

“This has been a decision a long time in coming. It involved lots of in-depth discussion with friends and family. My children are pleased for us as a family, I think, because I always used to say to them, ‘Oh, do you remember before I did BBC Breakfast?’ And they’d say, ‘Not really.’ And then I realised that, actually, my daughters are 20 and 17, so of course they don’t remember life before BBC Breakfast.

In an article published in 2020, Louise spoke exclusively about her experience with menopausal symptoms,

“I started experiencing the obvious menopausal symptoms about four years ago, when I was in my late 40s. For months I put the hot flushes, night sweats and overpowering tiredness down to a busy family life and having to wake up to present BBC Breakfast in the early hours of the morning. I blamed the 3.40 am alarm call for feeling uncharacteristically low, irritable, for an inability to remember simple words, and for doing silly things like putting the car keys in the fridge. That was until I was chatting to a friend who is a GP and who suggested there might be something else going on.

At that time, it occurred to me that if I was having issues, I was unlikely to be alone. I suggested we should start discussing menopause on BBC Breakfast to find out what problems people were facing and to see if we could debunk some of the common myths and taboos. Once again, I felt very apprehensive and vulnerable talking about it, especially on television, but when I described both the physical and the emotional symptoms, the low mood and anxiety, the response from the audience was extraordinary. Hundreds of women got in contact to say they felt like me, with many of them saying they would now go to their GP. I was incredibly moved too by the messages we had from partners, husbands, boyfriends and children saying we had opened their eyes to what their loved ones were going through.

I learned so much during our BBC Breakfast Menopause week. Firstly, I had no idea that there are 34 common symptoms of menopause and now play menopause bingo with my friends to see how many we are currently experiencing. The highest score so far has been 26.

Louise is an amateur triathlete and qualified as a member of the 2015 Great Britain Age-Group Triathlon Team (45–49 age group). She competed in the standard distance event which included,1500 m swim, a 40 km bike ride and a 10 km run at the World Triathlon Championships in Chicago on 19 September 2015. She qualified for the team at the Dambuster Triathlon at Rutland Water on 15 June 2015. She went on to finish 71st out of 78 finishers at the ITU World Triathlon Championships