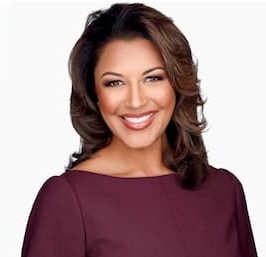 Lesli Foster is an American award-winning journalist serving as a weeknight anchor for WUSA9 evening broadcasts Monday through Friday. She is also part of the WUSA9’s Special Assignment Unit.

Foster stands at a height of 5 feet 3 inches tall.

Lesli is of African – American descendent.

Leslie attended Howard University in 1997. On March 7, 2020 she served as mistress of ceremonies for the 153rd Charter Day Dinner.

Lesli is the daughter of Gail Foster-Dorsey, there is no information regarding her father. Lesli revealed that her mother was a teacher and one of two African-American students who integrated John Glenn High School, in Westland, Michigan back in 1963. She added that her mother was never allowed on the bus with white students, so she and her classmate ended up walking a mile each way, to and from school, everyday. She said that that experience prepared her for life and she went on to become an inspirational educator.

There is no public information regarding Lesli’s biological father but her stepfather Michael L. Dorsey died in October 2018. Leslie posted a photo of him during her wedding with a tribute.

“Still hard to believe he’s gone. But giving thanks for an extraordinary life, human and stepfather. My family is remembering a devoted husband, father, grandfather, brother, uncle, cousin and friend. There is a sizable hole in our hearts and lives, but Michael L. Dorsey would not want us to cry for long. So we will laugh and cherish the moments that God allowed us to share together. Like the song we danced to at my wedding, Papa Mike was truly ‘Unforgettable’.”

Lesli is married to John Matthewson. He works for the HSC Foundation, a non-profit dedicated to helping individuals who face social and health care barriers because of disability, chronic illness, or other circumstances. The couple met through a mutual friend.

Lesli is a mother to one daughter known as Jordan.

Posting these photos of favorite daughter back in the day when her Daddy had to do her hair because Mommy was out of town for nearly a week. Thinking about the Oscar winning short film, #HairLove, that features a Dad doing his daughter’s hair. What a beautiful story about representation and inclusion. And shout out to all the #GirlDads whose daughters sport their crowns with glory! ?? #oscars2020 @wusa9

Lesli began her career as a weekend anchor and reporter for WEYI-TV, an NBC affiliate outside of Flint, Michigan. She later joined WBAL, the NBC affiliate in Baltimore. She mostly reported on homicides which she revealed took a toll on her.

“I was covering stories on young lives that were knocked out so soon for ridiculous reasons. Moms were coming down with their babies, walking to the scene to say, `what happened?’” She added, “It got to be too much for me.”

She was tapped by 9News which was later renamed to WUSA9.

Lesli joined WUSA9 in 2001 where she serves as a weeknight anchor for WUSA9 evening broadcasts Monday through Friday. She is also part of the WUSA9’s Special Assignment Unit – leading our “Impact” coverage that aims to tackle community issues.

She previously served as a consumer reporter. The station partnered with Call For Action, a non-profit, pro-consumer organization with volunteers all over the country.

Lesli said; “Call For Action is an incredible engine staffed totally by volunteers. They are able to make a difference with a group of dedicated people whose only focus is to help consumers get their problems solved. And they help businesses that have been scammed or defrauded.”

In 2012 Consumer Team received an Edward R. Murrow Award for a story on stray voltage, electricity that is present on the outside of a structures like manhole covers, bus shelters, parking meters, even crossing light signs around D.C.

Foster has covered major stories such as Rushern Baker, Prince George’s County Executive, who divides his time between governing a county of 900,000 and taking care of his wife with early onset Alzheimer’s.

She also did an interview with Steve Basu, the husband of Pam, who was killed on September 8, 1992. Pam was driving their daughter Sarina to her first day of preschool. Basu was filming Pam and Sarina getting into the car and inadvertently caught on camera the two men who would commit the brutal crime. Steve had never spoken about his wife’s death until, 20 years later; he agreed to speak with Lesli and her producer, Stephanie Wilson, at WUSA.

Foster’s salary is not public but according to paysa.com the average salary of a WUSA anchor is $80,002, with top earners earning more than $110,172.

Lesli’s net worth is under review.

I’d love it if you make plans to join me this weekend. I’ll be anchoring the CBS Weekend News from our beautiful @wusa9 studio. This team is proud to partner with our @cbsnews family to deliver this newscast coast to coast. Saturday evening at 6:30. Sunday at 6. Hope to see you then. ❤️