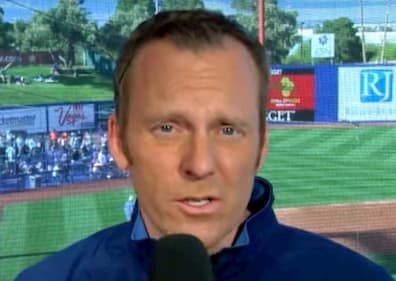 Len Kasper is a media personality serving as a radio play-by-voice of the Chicago White Sox of Major League Baseball on ESPN 1000. He previously worked for the Chicago Cubs for 16 seasons.

He is married to Pam Kasper.

Lean has a son known as Leo.

Kasper joined the Chicago Cubs as play-by-play announcer in 2005. He spent his final season alongside analyst Jim DeShaies. In 2011 he received the Harry Caray Sportscaster of the Year Award from the Pitch and Hit Club of Chicago. He previously worked as a play by play announcer for the Florida Marlins from 2002 to 2004.

He began his career in 1994 working for WTMJ-AM (620) in Milwaukee as the host of the station’s daily sports show, hosted pregame and halftime shows for the Green Bay Packers, and was a co-host on a hot stove league show on the Brewers’ radio network until 2002.

In the late 1990s, he began working with Brett Dolan on the weekends after he realized he would need experience calling games. He was asked to do fill-in TV work with the Milwaukee Brewers for Matt Vasgersian who started to get work on the national stage in 1999. He continued to work alongside Bill Schroeder as a fill-in for Vasgersian on Brewers telecasts through 2001.

On December 4, 2020 Kasper announced that he would be joining White Sox’ radio booth on their new flagship station, ESPN 1000.

In a statement he said; “Broadcasting baseball on the radio has always been my dream, I am happy the White Sox were interested in having me handle their play-by-play responsibilities, and I am appreciative that the Cubs were willing to let me leave that organization on such great terms.

I have always been fascinated by the creative freedom radio allows its broadcasters, and baseball is such a great game when presented on the radio. I have been dreaming about doing this since I was 12 years old, listening to Ernie Harwell, and I didn’t want my career to pass without experiencing this great game nightly from the radio booth. I want to thank both the Sox and Cubs for allowing me to live out this baseball dream.”

Why Did Len Kasper Leave Cubs

Len left the Cubs to fulfill a childhood dream. Kasper said working for White Sox was a childhood dream. “Speaking to you today is the 12-year-old Len Kasper, and this is emotional for a lot of reasons. When I was 12, I wanted to be [late Tigers Hall of Fame broadcaster] Ernie Harwell. Ernie was the hero who became a mentor and a good friend. If I have one regret today, it’s that when I got the Marlins job [in 2002], I got a handwritten letter from Ernie; when I got the Cubs job [in 2005], I got a phone call from Ernie. You don’t know how much that means to someone like me.”

The Cubs and Marquee made every effort to keep Kasper and even asked for an extra day to come up with a more enticing package that Kasper said “blew him away.” But he listened to his gut.

“If I don’t do this now, I might not never get this opportunity. I’m not the young kid anymore. I’m a kid at heart. This is 100% about a moment in time during which I could not pass up the opportunity of a lifetime.”

Details about his contract with White Sox are not public.