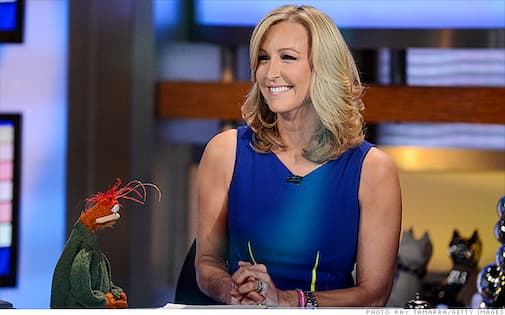 Lara Spencer (born as Lara Christine Von Seelen) is an American television host Her most well-known role is as a co-anchor on ABC’s Good Morning America. She also works as a correspondent for ABC News and Nightline.

She has a standing height 5 Feet 9 Inches tall.

Garden City High School, where she graduated in 1987, was her alma mater. She was a nationally ranked competitive diver who competed at Pennsylvania State University on a springboard and platform diving scholarship. In 1991, her senior year, she was selected an All-American Athlete and earned a degree in broadcast journalism.

Spencer is a loving daughter to Richard Von Seelen and Carolyn Von Seleen . His father passed away in January 2011 with his obituary saying he died peacefully.

Spencer is happily married to his husband of Richard McVey. The couple married in an outdoor ceremony in Vail, Colorado on August 8, 2018. A mutual friend set Spencer and McVey together on a blind date in 2017. They announced their engagement in January of 2018. From 2000 to 2015, Spencer was married to real estate broker David Haffenreffer.

Who is Richard McVey?

McVey has also been married before, and he and his ex-wife have three daughters together. At the ceremony, all five children were present and offered readings. McVey, who is 62 years old, grew up in a Cleveland suburb. His father was the owner of an oil company and a stock investor.

He graduated from Ohio University with a bachelor’s degree in finance and later obtained an MBA from Indiana University’s Kelley School of Business in 1983. McVey joined JP Morgan in 1991, rising through the ranks and finally relocating to New York. McVey launched MarketAxess in April 2000 and has remained as chairman since since. MarketAxess is a corporate bond and other product electronic trading platform.

She is a loving mother of two children from her first marriage, Katharine  Paige Haffenreffer and Duff Haffenreffer.

Spencer enrolled in the NBC page program. She went on to work as a reporter, producer, editor, photographer, and news van driver for the CBS affiliate WDEF-TV in Chattanooga, Tennessee.

Along with that,  she  joined News 12 Long Island a year later and anchored the 3 a.m. newscast for WABC-TV. Spencer covered the TWA Flight 800 accident while there, which was her big break. In 1999, she became a national correspondent for ABC’s Good Morning America. Spencer announced her plans to leave her role as a co-anchor on Good Morning America in 2018.

In 2019, Spencer was the guest picker on College GameDay for the Michigan vs. Penn State game. Lara finally  went back to work at the Good Morning America studio in September 2021, joining her co-stars Michael Strahan, Robin Roberts, George Stephanopoulos, and more.

Spencer’s first book, I Brake for Yard Sales, was published and released in April 2012, and it is a tutorial on how to create high-end appearing rooms with secondhand findings.

On September 16, 2014, Spencer’s second book, Flea Market Fabulous: Decorating Gorgeous Rooms with Vintage Treasures, was published and presented as a guide to designing rooms and homes.

Spencer has a networth $ 20 million according to Celebrity Net Worth.