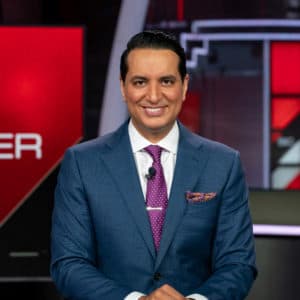 Kevin Negandhi is an ESPN SportsCenter and ESPN College Football on ABC sports anchor in the United States. He also serves as a fill-in anchor on NFL Live and First Take and anchors Baseball Tonight, College Football Live, and Outside the Lines on ESPN.

He is of Indian-American descent. He is the first Indian to host national sports news on American Television.

He attended Phoenixville Area High School in Phoenixville and graduated with honors. In 1997, he graduated from Temple University with a bachelor’s degree in communications.

He is a beloved son to Sanat(father and Usha (mother. ) His father was an accountant. His mother grew up so poor that she had to share a pencil with her younger sister. Both of them are from Mumbai.

He is a younger brother to Vimal Negandhi who is a sports psychologist.

Negandhi married his long-time girlfriend Monica Buchanan. Monica, his now-wife, is also a newscaster with The NBS Connecticut news team. In 2009, the couple married and have been together since.

He is a loving father of Noah, McKenna, and Carey.

In September 2006, Negandhi joined ESPN and made his ESPNews debut in October.  He worked for Fox’s Philadelphia Inquirer High School Sports Show as a correspondent. He has also presented the Rose Parade on ABC from 2018 to 2020, in addition to being a guest host on Get Up! Negandhi has been hosting the Special Olympics World Games and USA Games on ESPN and ABC since 2015.

Additionally, in 2020, he presented the first-ever NBA Draft, which was broadcast on ABC. He is the first Indian-American anchor on a national sports network in the history of American television. He also worked as a stringer for the Gannett News Service, covering six local colleges for USA Today. Under the guidance of Rick Beardsley, he was also a member of Temple Update, a student-run newscast.

Moreover, for two years, he was the sports editor for the Temple News, the school’s newspaper. Negandhi was also the radio voice of the Temple women’s basketball team on WRTI 90.1 FM in Philadelphia. From 1998 to 1999, he worked as a sports anchor and later as the sports director at KTVO-TV in Kirksville, Missouri, becoming the country’s second Indian-American to do so.

Along with that, Negandhi worked as a sports anchor/reporter for three years at WWSB-TV in Sarasota, Florida. He returned to Sarasota after a year away from television and worked as the sports director at WWSB-TV from 2004 to 2006. Eventually, he earned three Associated Press honors while working in Florida, including “Best Sportscast” in 2004 and 2005 and “Best Breaking Sports News” in 2005.

His salary is estimated at $87 thousand annually.