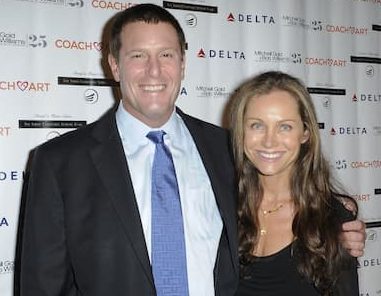 Kevin A. Mayer is an American entrepreneur who was appointed as the new TikTok CEO and COO of Chinese tech group ByteDance in May 2020. He is the former Chairman of Direct-to-Consumer and International division of The Walt Disney Company.

Kevin is married to Lisa Arning Mayer since May 17, 2003. She holds a Masters in Business Administration from Columbia University and a degree in Mechanical Engineering and a degree in International Relations from Tufts University.

She a real estate investor according to her LinkedIn page and is also an actress having appeared on Hollywood Homicide (2003), The Medicine Show (2001) and CSI: Miami (2002).

Mayer is the former Chairman of Direct-to-Consumer and International division of The Walt Disney Company. He first joined Disney in 1993 where he handled strategy and business development for Disney’s Interactive/Internet and television businesses worldwide. He later was promoted to head up Disney Internet group as executive vice president. He left the company in 2000.

In June 2005 he rejoined the company as Executive Vice President, Corporate Strategy, Business Development, and Technology. In October 2005 he became the executive office. In his position, he was involved with the purchases of Pixar, Marvel Entertainment, Lucasfilm, Club Penguin and Maker Studios, as well as its agreement reached in December 2017 to acquire most of the 21st Century Fox assets.

He will be replaced by Rebecca Campbell whose portfolioincludes the company’s international businesses, including Disney’s International Channels, Fox Networks International and Star India. She was a member of the Direct-to-Consumer and International leadership team as President, The Walt Disney Company — Europe, Middle East and Africa (EMEA), where she oversaw the Disney+ launch strategy and direct-to-consumer roadmap for the region.

In his exit statement, Mayer said that the business was in great hands as Rebecca was a member of the DTCI team from its inception.

“I am very proud of what our extraordinarily talented Direct-to-Consumer and International team has accomplished in creating and delivering a world-class portfolio of streaming services, particularly Disney+. Rebecca was a critical member of the DTCI team from its inception, and I am certain the business is in great hands and will continue to expand and thrive under her expert leadership. It’s truly been a privilege for me to be part of the iconic Walt Disney Company, and I am enormously grateful to Bob Iger for his trust and confidence, and to Bob Chapek and his senior management team for their collaboration and support over the years.”

Kevin is set to become the CEO of TikTok and will also become the chief operating officer of TikTok parent, giant Chinese tech group ByteDance. He is set to start his new job on June 1, 2020.

He will be in charge of driving the global development of ByteDance, as well as overseeing corporate development, sales, marketing, public affairs, security, and legal. He will lead music, gaming and emerging businesses and oversee TikTok’s global expansion.

Yiming Zhang, ByteDance founder-CEO in a statement said; “Kevin’s wealth of experience building successful global businesses makes him an outstanding fit for our mission of inspiring creativity for users globally. As one of the world’s most accomplished entertainment executives, Kevin is incredibly well placed to take ByteDance’s portfolio of products to the next level. I look forward to working very closely with Kevin on our global development and the next chapter of the ByteDance story.”

On August 26, 2020 Kevin said he was resigning from TikTok after the company came under sustained pressure from the Trump administration over its ties to China.

According to the NYTimes Kevin in a note to employees said a series of changes to TikTok’s structure had prompted him to leave. The app which is owned by the Chinese internet company ByteDance has been ordered by the White House to sell its U.S. operations by mid-September.

“In recent weeks, as the political environment has sharply changed, I have done significant reflection on what the corporate structural changes will require, and what it means for the global role I signed up for against this backdrop, and as we expect to reach a resolution very soon, it is with a heavy heart that I wanted to let you all know that I have decided to leave the company.”

Kevin’s salary as the Chairman of Direct-to-Consumer and International division of The Walt Disney Company was never made public. His salary as the CEO of TikTok is also not public.

Mayer has an estimated net worth of $15 million.