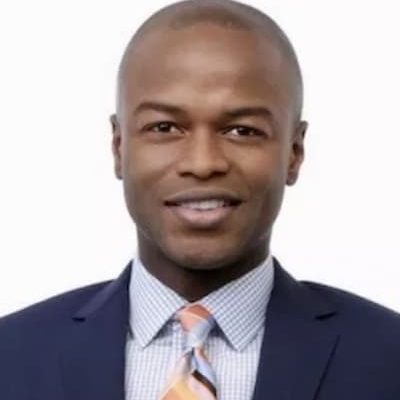 Kendis Gibson is an American media personality serving as an anchor for MSNBC. He hosts MSNBC Live with Kendis Gibson and Lindsey Reiser and previously served as an entertainment anchor for CNN and a correspondent for ABC News and also anchored World News Now and America This Morning.

He was born on 6 September 1978 in Belize, Central America.

His ethnicity is Afro-American.

He attended John Jay High School now named as John Jay Educational Campus in the Park Slope neighborhood of Brooklyn in New York City. Later after high school, Kendis joined the State University of New York at Oswego, where he graduated with a Bachelor of Arts in Political Science.

Gibson is the son of  Alrick Gibson and Hortense Gibson. His father was the finest cabinet maker and his mother a housewife. However, he hasn’t revealed any further details regarding his parents.

Gibson was brought up alongside his six brothers whose information he hasn’t revealed.

Kendi has kept his love life off the limelight and he hasn’t given any details on whether he is single, dating or married. However, Kendis shares a wonderful friendship with Diane Macedo who is his fellow mate and co-anchor of ABC’s World News Now. The duo have such a strong bond that they never hesitate to exhibit their bonding via social media. On September 6, 2017, Diane Instagrammed a picture with Kendis and wished him on his birthday. She even captioned him as her “work husband” as well as on-camera and sometimes off camera partner in crime
Likewise, on the birthday of Diane on 28 February 2018, Kendis posted a picture of her with the caption “work wife and friend”.  Moreover, Kendis shared a picture on Instagram with Diane on the occasion of their 2nd anniversary of working together but none of them has come out clear on whether they are an item.

No information on whether he has any kids is not available.

Kendis is currently serving as a journalist and a reporter for NBC News and MSNBC after joining the channel in January 2019. Previously Gibson worked for CBS News in Los Angeles as west coast correspondent for CBS Newspath. He also served as an entertainment correspondent including topics like the 2011 trial of actor Mel Gibson, when Gibson agreed to plead guilty to a misdemeanor battery charge.

He also worked for WJLA, the ABC affiliate Washington, D.C. in October 2011. In December 2013, he joined ABC News as a correspondent. He also worked for CNN and CNN Headline News as an entertainment anchor and occasional news anchor seen nationally. During his time there, Gibson would often make the rounds on the red carpet including the Academy Awards and the Grammy Awards. Gibson has also spent time in the hosting world with HGTV’s I Want That! and as an evening news anchor for KSWB-TV news in San Diego, California.

Gibson also worked at the NBC station in Rochester, New York where he served as a reporter for a period of three years, then he moved to WTXF in Philadelphia as the morning anchor and reporter. At NBC he reported on some of the biggest news stories at the time, including the crash of the Concorde. With his home just blocks from the World Trade Center, he was one of the first reporters on the scene following the attacks of September 11, 2001.

Gibson has an estimated net worth of $1 million.