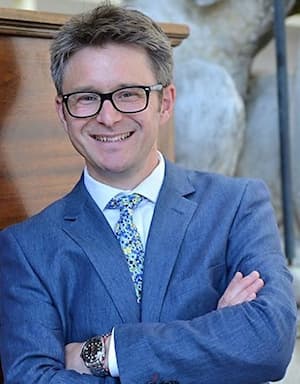 Jonathan Pratt is an antique expert who specializes in jewellery and makes regular appearances on the BBC’s Antiques Road Trip, Bargain Hunt and Flog It. He serves as the managing director of Dreweatts 1759 and previously worked as the Bellmans Auctioneers managing director. He is a Fellow of the Gemmological Association and a Fellow of the Royal Institution of Chartered Surveyors

Jonathan is married although there are no details available about his wife.

Together with his wife, he has four children.

Pratt is an antique expert whose interest in Antiques began in his early teens, 1986 to be precise, with the first television series of Lovejoy on BBC

In his blog he wrote, “Lovejoy introduced to me a world that I knew nothing about. There weren’t antiques in my parents’ house or my friends’ homes, so the thought of owning something 200 years old was amazing. After a poor academic performance in my A levels I was left with the decision of what to do with my life! It was then that I came across the Fine Art & Chattels Diploma that was run in Southampton by the ISVA (and later RICS) and I decided to forge a career in ‘the Trade’.”

After finishing his education, he moved to Edinburgh and started as a furniture porter at Phillips Auctioneers. Over the next 10 years, he worked in salerooms and valuers offices in London, Guildford, Newbury and Sussex. In 2005 he joined Bellmans Auctioneers in Wisborough Green as a managing director.

He previously served as the Managing Director of Bellmans (2005 – 2018) where he oversaw a four-fold increase in the firm’s turnover and introduced a streamlined three-tier sale system.

Pratt makes regular appearances on BBC’s Bargain Hunt, Antiques Road Trip and Flog It. During an interview, he said his most memorable team was “two lady spiritual ‘Mediums’. One had had a vision that she was going to buy a box, and then spent 30 minutes looking for it. In the end I suggested we let the box find us!”