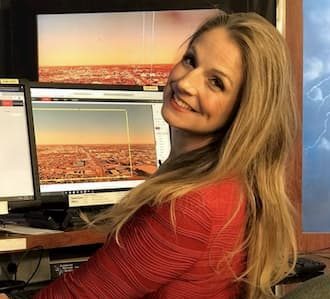 Kelly Plasker was a Texan weather forecaster for KCBD NewsChannel 11 in Texas. She died on August 30, 2020 after posting a Facebook post alleging that a teacher groomed her for a relationship in high school.

Plasker didn’t share much on social media about her family but she was raised in an Air Force family which helped her learn the value of duty, community and loyalty.

It is not clear whether Kelly was married at the time of her death.

Kelly was a mother of three children; Thomas Jones (who committed suicide in 2018), Bailey and Spencer Jones.

His obituary read in part; “Thomas was always a very loving young man who deeply cared for his friends, family, or a stranger in need of care. Although school was not a big priority, his high level of intelligence was undeniable.”

Kelly had a son with Jon Locke, according to Thomas’ obituary it states his father is Jon Locke.

Plasker was a weekend morning forecaster at KCBD NewsChannel11. She had worked for the station for over three years.

On August 30, 2020 Kelly posted on her Facebook page that while in high school her band director groomed her for a relationship in high school.

The Facebook post read; “I got thrown off course in high school by a man twice my age. My band director, using his time at Frenship high school to find his new “soul mate! he was supposed to be somebody looking out for me, but instead of looking out for me he looked at me in ways that men should not look at children.  And I realize now that predators pick off easy prey. Particularly those without much family support or resources.

The bad habits and games being in that 5 year long relationship can be called grooming and abusive at times call it total manipulation. I have unfortunately carried into relationships of mine that would’ve probably been beautiful had I not been convinced that I wasn’t worthy that I was never going to be good enough for anybody with which I can make memories and grow old together.

He snuffed out my future and my ambitions in the most influential time of my life, my prime when I had so many doors and opportunities to explore but he was selfish convincing me that he didn’t want me to leave Lubbock Texas.  And then the promises came. The promises of the new life together the promises of conquering the world in a business to grow. Those promises quickly shattered when I learned that he was still  playing house in two different cities.

The rest is a sorted history depending on who you ask. The bottom line I tried to encourage Jon to love Thomas but I have sadly learned that not only were Laura and I his students and victims of his inappropriate use of authority as an educator but have been contacted by more women with the same stories; only now realizing how perversely pervasive, things situations which are still happening in our school systems MUST STOP!

Thanks all I needed to get out there as my final confession for the sins I am responsible for adding to the cross. I love you my friends. My brain is broken and I cannot take it anymore.”

Kelly died on August 30, 2020 at her home in Ransom Canyon, Texas.  After her death, Dan Jackson, Vice President at KCBD released a statement that read; “We are deeply saddened by the tragic and sudden loss of KCBD weekend morning forecaster Kelly Plasker. Kelly was a dedicated member of the KCBD weather staff, well-liked by viewers, and admired by her co-workers. Our deepest sympathies go out to Kelly’s family in this time of great loss.

We would like to thank the many viewers who have reached out through our social media channels in kindness and support to honor Kelly’s memory. Grief counselors have been made available to all members of the KCBD family struggling with this heartbreaking news.”

Kelly Plasker Cause of Death

Kelly’s cause of death has not been revealed yet.

It is not clear whether Kelly committed suicide or not. There are speculations that she might have committed suicide after a tribute to her aired on KCBD on the night of August 30. The narrator said, “In her three years on air, she showed us her passion for weather, which came through in her forecasts that kept us all safe and prepared for the day ahead.” Following the broadcast, the phone number for the National Suicide Prevention Lifeline was shared.