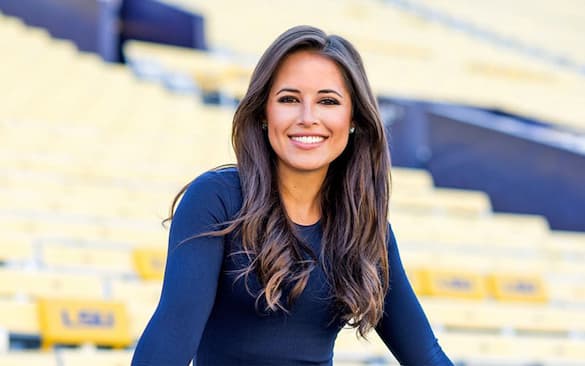 She stands at a height of 5 feet 2 inches approximately 1.57 meters tall.

She is a beloved daughter to Joe Hartung(father) and Julie Tucker(mother). Kaylee’s father was a World War II pilot who used his expertise to put on shows all around the world. President George H. W. Bush praised Mr. Hartung’s flying abilities in a letter, stating that the pilot put on a thrilling performance with the vintage planes.

Kaylee revealed on Instagram that her father was not just a navy commander who completed 58 combat missions, but he was also awarded the Distinguished Flying Cross. Kaylee remembers her father as the best parent in the entire universe, but he died when she was ten years old. There was an aircraft disaster that killed Joe Hartung while he was performing in Lafayette, and it was all over the news.

Kaylee’s naive thinking puzzled why her father’s death was being treated as an event when she saw CNN reporters informing the public of the breaking news. Despite the uncertainty, Kaylee knew she wanted to spend the rest of her life sharing stories, and her career path was set in that moment.

She has one brother younger than her and who is now a pilot.

She is currently single as far as we know. However, rumors had gone around that she was involved with former NFL superstar Tim Tebow. Hartung later dismissed the information describing Tebow as a brother to her. She is interested in somebody who likes sports like she does.

Who is Tim Tebow?

She has no know children.

Hartung departed CNN after nearly two years to work for ABC News. She has covered a variety of topics for the network, including murder stories, feel-good stories, and the Coronavirus pandemic. Hartung reported from Seattle, where the first COVID-19 epidemic in the United States occurred, in March 2020.

She got her first full-time job with CBS News after graduating from college. She then went on to work for CBS’ Face The Nation with Bob Schieffer. In the fall of 2012, Hartung began her career at ESPN. She primarily covered college football and basketball for the network, but she also appeared on SportsCenter. She began her career as a sideline reporter for SEC Nation’s Saturday football coverage and rose through the ranks to become the sideline reporter for the SEC Network’s Prime Time Football Game.
In addition to that, one of her feature story on Texas Longhorns fan Brandon Puente, and another for hosting a Longhorn Network special on women’s history month. During one of her viral moments with SEC Network, she was interviewing former LSU head coach Les Miles on his way to work when he ran a red light on video. Many assumed Hartung would take Sam Ponder’s spot on Sunday NFL Countdown after she left College Game-day.
Hartung abruptly quit ESPN before Ponder’s replacement was chosen, much to everyone’s astonishment. She later announced her departure from the Worldwide Leader in April 2017 to serve as a CNN journalist. Hartung’s transition from ESPN to CNN demonstrated her versatility as a journalist.

Despite the fact that SEC football is a huge thing, Kaylee Hartung’s CNN pieces were about as important as they get. The journalist was also present when a guy drove through a throng of people during dueling protests in Charlottesville, Virginia, killing a young woman. She covered several disasters, including Hurricane Irma, as well as the horrible school massacre in Parkland, Florida.

She covered the College Football Playoff and both the men’s and women’s NCAA Tournaments in addition to her usual responsibilities.”Kaylee’s preparedness and passion for college football is what I think makes her stand out on the sidelines and stand out on the field,” said Jesse Palmer, who worked closely with Hartung. “She virtually lives out of a bag,” he continued, “going all over the country on short notice and consistently delivering top-level reporting.” Hartung won two Emmys during his time at ESPN.

Kaylee felt a headache right between her eyes in an area where she was not used to on March 2020. Her body was also aching abnormally. After four days after returning from Seattle, she tested positive for the virus.

She has garnered an estimated networth of $ 3 million.