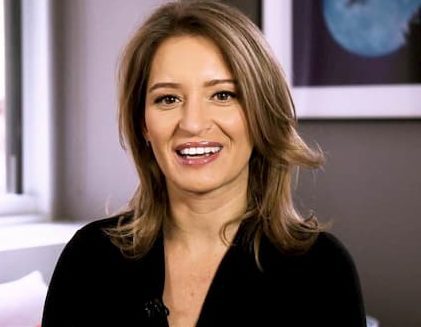 Katharine Bear Tur is an American journalist and author. She is a correspondent for NBC News and anchors for MSNBC Live.

Katy graduated from the University of California Santa Barbara with a B.A. in Philosophy. She says that as a journalist Philosophy allows her to ask questions.

“I graduated with a B.A. in philosophy and it was by far the best major I could have taken in college. A lot of people in this business take journalism as a major. Others take communications. It allows me to ask questions, and that is what I do every day.”

The couple divorced in 2003 after 23 years of marriage.

Katy is the biological daughter of Robert Albert Tur who has since transitioned and is known as Zoey Tur. She is an American reporter and commercial pilot who created Los Angeles News Service with fellow reporter and then-wife Marika Gerrard. The Los Angeles News Service became the first to use an AStar helicopter in a major city to cover breaking news, and the first to televise a high-speed police chase.

In 2017 she alleged that she had become estranged from Katy because of her transition to which Katy responded and claimed that they were not on speaking terms for a little while but it wasn’t because of the transition.

Katy has one brother known as James Tur, who is a medical professional.

Sorry I missed my show today but …. my brother graduated from medical school today and I couldn’t be a prouder older sis! Now we have a doctor in the family. A Doctor Tur. DocTur? pic.twitter.com/ALnrHiIXHx

Katy married her husband, Tony Dokoupil in 2017. He is an American journalist serving as a co-host of “CBS This Morning.” He previously served as a CBS News correspondent and a “CBS Sunday Morning” contributor.

Katy has one son known as Teddy Dokoupil who was born in April 2019. He was born via an unplanned C-section and was born small and was beginning to lose weight. She told TODAY;

“Teddy was born healthy, but small, really small, 6 pounds and 4 1/2 ounces-small. A few days later he got even smaller, down to 5 pounds and 15 ounces. He was in the seventh percentile. It was fine, so long as he gained it back, which meant that he needed to eat and eat and eat and eat, which was not so easy, not only because of the C-section but because breast milk is not the instant grab-and-go, ready-made meal you might think it is before you suddenly try to produce it.”

How Many Children Does Katy Tur Have

Katy has three children; one biological son and is a stepmother to Tony’s two children from his previous marriage.

Katy alleges that she is of Greek descendent. She says that her Greek grandfather called her Katarina, greek for Katherine. In June 2019 she posted on Twitter mismatched evil eyes and said she was Greek.

Katy is a correspondent for NBC News and anchors for MSNBC Live. She first joined NBC as a reporter for WNBC-TV, an NBC affiliate in New York City. Three years later she moved to NBC where he first assignment was to cover the death of Corey Monteith, then a motorcycle attack on an SUV, followed by the search for Malaysia Airlines flight MH-370.

She was later appointed as a correspondent and began contributing to such shows as “Weekend Today” (2012-2016), “NBC Nightly News with Lester Holt” (2012-2017). In 2016 she was named as the embedded reporter for the Donald Trump presidential campaign.

Katy began her career as a reporter for KTLA Channel. She also worked for News 12 Brooklyn, Fox 5 New York and briefly worked as a storm chaser for The Weather Channel as a part of the VORTEX2 team.

Katy has an estimated net worth of $4 million.

In September 2017 she released her book, “Unbelievable: My Front-Row Seat to the Craziest Campaign in American History” which debuted on the New York Times best seller list.

In February 2020 Daily Beast journalists Lachlan Markay and Asawin Suebsaeng published a book, “In Sinking in the Swamp: How Trump’s Minions and Misfits Poisoned Washington” in which they allege that Donald Trump referred to Katy Tur as “that bitch with the tranny dad” during the 2016 campaign.

He was reportedly refering to Tur’s biological father Zoey Tur who cameout as transgender in 2013 and in 2015 became the first transgender person to be a national news reporter.

Trump was first interviewed by Katy in 2015 shortly after he announced his campaign. She pushed back on Trump’s foreign policy claims and racist statements, which led to Trump calling her “a very naive person.” He called Tur “Little Katy and a “third-rate journalist” during campaign rallies, and included her when branding the media “scum.”

She later deleted the tweet and offered her apologies. “I’ve deleted that last tweet out of an abundance of caution. Waiting on more info. Apologies.”

I’ve deleted that last tweet out of an abundance of caution. Waiting on more info. Apologies.

Studio Apartment, indeed. Thanks @nypost for the quarantine profile. Pro tip for surviving work, marriage, and parenting all in the same space every single day: 3:30 wine break. Right, @tonydokoupil