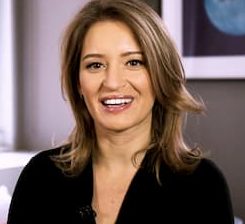 Katharine Bear Tur is an American  media personality working as a correspondent for NBC News. She is an anchor for MSNBC Live and has reported for the NBC news platforms Early Today, Today, NBC Nightly News, Meet the Press, WNBC-TV, MSNBC, and The Weather Channel.

Tur stands at a height of 5 feet 4 inches tall.

Katy attended  Brentwood School  and later joined  the University of California, Santa Barbara  where she graduated with a Bachelor of Arts in philosophy

Tur is the daughter of Hannah  Zoey Tur and Marika Gerrard . Her mother born Robert Albert Tur  is an American broadcast reporter and commercial pilot.  Her parents  were a husband-and-wife reporting team, the founders of the Los Angeles News Service. Katy’s parents however divorced in 2003.

In June 2013, Tur publicly came out as transgender and in 2014 revealed that she was undergoing hormone replacement therapy. In August 2014, following gender reassignment surgery, she applied to a court to change her name and gender marker from male to female. Reflecting on her transition in a 2017 interview, Tur stated, “What I have is not political. It’s a medical condition that was treated. I’m cured. I’m done. It’s not a mental illness. There are differences in the brain.”

Tur was brought up alongside her younger brother James Tur, a medical student.

Katy is married to her  longtime boyfriend, Tony Dokoupil, correspondent for CBS News. He  hosts This Morning, a popular morning news show. He has also written a number of pieces for publications such as Newsweek and The Daily Beast. The duo exchanged their marriage vows in October 27, 2017, in Utah.   Tur was also  in a relationship with then-MSNBC political commentator and sportscaster Keith Olbermann before she met Tony.

Tur and Dokoupil welcomed their son, Teddy, in early 2019. Tur is also a stepmother to Dokoupil’s two children from a previous relationship.

Tur joined NBC’s local station in New York City, WNBC-TV in 2009 and then  NBC News at the national network level.   Her coverage of the March 2008 crane collapse on the Upper East Side of Manhattan earned her  AP’s Best Spot News Award. She also covered the death of Cory Monteith, a motorcycle attack on an SUV, and the search for Malaysia Airlines Flight 370.

Tur was the NBC News and MSNBC’s embedded reporter for the Donald Trump presidential campaign. She  was assigned the task of informing the Trump campaign about the Access Hollywood tape featuring Trump’s conversation with Billy Bush about women that the network had in possession.

On several occasions during his campaign rallies, Trump singled out Tur in his criticism of the press. At an event in Florida, Tur was booed by Trump supporters and, according to CNN anchor Wolf Blitzer, verbally harassed. According to Trump campaign manager Kellyanne Conway, “[Trump] didn’t mean it in any malicious way”, and he did not want anyone to attack or harass her. In 2017, Tur received the Walter Cronkite Award for Excellence in Journalism.

Prior to working for NBC, Tur also reported for KTLA, HD News/Cablevision, News 12 Brooklyn, WPIX-TV, and Fox 5 New York. She also  worked as a storm chaser for The Weather Channel on the network’s VORTEX2 .

In September 2017, Tur published a book, Unbelievable: My Front-Row Seat to the Craziest Campaign in American History, recounting her experience in covering the 2016 presidential campaign of Donald Trump. The book spent several weeks on the New York Times Best Seller list.

She has an estimated net worth of $4 million

A post shared by MSNBC Live with Katy Tur (@katyturnbc)