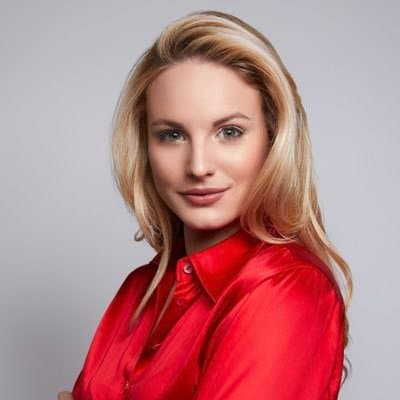 Katie George is an American sports commentator who presently works for the ACC Network and ESPN. Prior to joining ESPN, she worked as a sports anchor and reporter for WDRB in Louisville. George most recently worked as a sideline reporter for the Milwaukee Bucks during the 2018-19 season.

She was born on 3rd December 1993, in Louisville, Kentucky, United States.

George was a member of the volleyball team at Assumption High School in Louisville, an all-girls Catholic school. Katie was named the Atlantic Coast Conference’s (ACC) player and setter of the year in 2015. She attended the University of Louisville where she graduated with a bachelor’s degree in Sports and Communication.

She is of Lebanese descent and ancestry. This is because her grandparents were from Beirut Lebanon

She has two brothers Carles George and Timmy George.

She is in a relationship with John Prince DelPiccolo.John is a footballer and a brother to Luca DelPicollo. This information was revealed by John’s brother when he posted the two on his page during their engagement ceremony. They got engaged in 2020. On January 21, 2022, Katie did a wedding which was a private ceremony with attendees only. Katie lives in Louisville together with her husband and her dog.

No, Katie and Phyllis George are not related to each other in any way. They just share a common surname

Additionally, George, the 2015 ACC Player, Holder, and Scholar-Athlete of the Year, led Louisville to three different conference championships. She was named to the American (2013) and the ACC’s first-team all-conference teams three times (2014 and 2015). George was again elected Miss Kentucky USA in 2015, and went on to place in the top 11 of the Miss USA pageant, winning the “People’s Choice Award.”

She earns a salary of approximately $72000 annually.