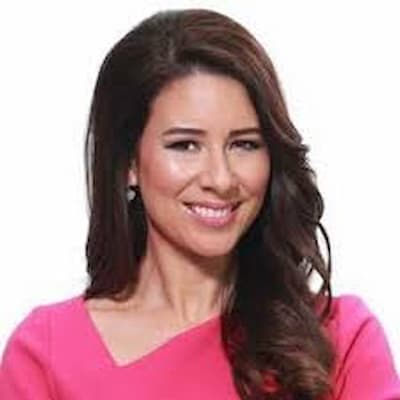 Karen Tso is an American media personality serving as a co-anchor of CNBC International’s flagship programme Squawk Box Europe. She previously served as an anchor for Nine Network, Sky News and ABC as well as a reporter for radio current affairs programme PM, and ABC Local Radio.

Karen was born on September 14, 1977, in Brisbane, Queensland, Australia.

Karen stands at a height of 5 feet 3 inches tall.

Karen was born and brought up in Brisbane by her parents. Her father is Chinese. She hasn’t revealed any further information regarding her parents and it’s also not known whether she has any siblings.

Tso is married to Hector Thompson. She had kept her marriage life a secret until 14 June 2015 when she first introduced Hector in her Instagram post.  But, as she uploaded the picture of her husband, she tagged professional cyclist, Chris Froome in the photo: probably for keeping her husband’s identity out of the focus. On 7th January 2018, Hector also shared a photograph of the pair celebrating 2017’s Christmas together. Similarly, the duo went for a date night at The Ritz located in London which Karen mentioned was their wedding venue and in January 2019, she referred to Hector as ‘official husband’.

Karen and her husband are proud parents of a daughter named Isabella.

Tso has anchored across the CNBC network, including CNBC Asia where she anchored Squawk Australia a one-hour show with the mission of delivering Australian business news to the world, and global business to Australia. In early 2010, as part of programming revamp, Tso moved to Singapore to take up a new role as co-anchor of Asia Squawk Box, along with veteran anchor Martin Soong and Bernard Lo. Tso also began co-anchoring a new one-hour morning show with Bernard Lo titled The Call. At the start of 2012, Tso moved to CNBC Europe and is a co-anchor of Squawk Box Europe.

Prior to joining CNBC, Karen worked for Nine Network as an anchor where she presented business and finance stories for the country’s top-rated evening bulletin, National Nine News as well as reporting for Business Sunday, The Today Show, Nightline and My Home Property. Alongside her Nine duties, Tso anchored Sky Business Report in the evening for Sky News. She also worked for five years at Australian public broadcaster ABC, anchoring the first live nightly finance segment on flagship news and current affairs programme Lateline and also worked as a reporter for radio current affairs programme PM, and ABC Local Radio.

Her annual salary is not known.