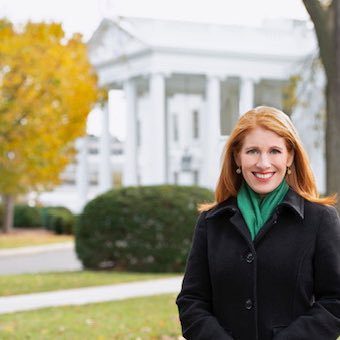 Karen Travers is a Washington-based correspondent for ABC News, having joined the network in 2000. She is presently a White House reporter covering all elements of the Trump administration.

Karen is a proud “double Hoya,” having graduated from Georgetown University with a bachelor’s degree and a master’s degree.

She has a standing height of 5 feet 5 inches tall.

She is a lovely daughter to William J. Travers (father) and Bernadette M. Travers (mother)

She is happily married to her husband, John Millies Anderson. They tied the knot on 10th, September 2011 at Villa Maria by the sea in New Jersey.

She is a loving mother of three young children and they all live in Washington, D.C. On March 7th, 2013, she gave birth to her first child, Maeve Travers Anderson. Kelly and Matthew, her twins, were born prematurely and spent 11 weeks in the NICU before being reunited with their parents.

Travers is an ABC News White House correspondent. Her reporting may be heard on 1650 ABC News radio stations and viewed on 200 ABC News affiliate television stations, as well as on ABC News Live, a 24-hour streaming channel. Karen began her career at ABC News as an intern in 2000. She has covered national and international politics extensively during the past 20 years, including primaries and caucuses, Republican and Democratic conventions, and televised debates in every election cycle since 2004.

Additionally, Karen has been to 49 states and more than 60 countries as a member of the White House press corps throughout the Bush, Obama, and Trump administrations. She covered the government shutdowns of 2013 and 2019, as well as the mass shooting at Washington’s Navy Yard. She also covered the Amtrak derailment in Philadelphia, the grand jury decision in Ferguson, the Baltimore riots, and a slew of other key Supreme Court debates and judgments. She spent four years covering the 2008 election and the Obama administration before reporting on the Trump White House.

Along with that, Travers was a producer on both of President Obama’s covert travels to Afghanistan in 2010, as well as a reporter on his other international excursions. She covered the Obama Administration’s domestic policy agenda extensively, including the development and passage of the Affordable Care Act. Karen was the network’s deputy political director for election coverage in 2008. She oversaw coverage of the Democratic and Republican delegate procedures, covered critical battleground states, and reported from both presidential debates and conventions.

Furthermore, she was a member of the ABC News crew that won an Emmy for their coverage of President Barack Obama’s inauguration. Travers worked as a White House producer for the Bush Administration from December 2004 until June 2007, before joining ABC News’ political unit. She was also in charge of ABC News’ editorial coverage and event, speech, and breaking news planning at the White House.

Travers also worked as a producer in ABC News’ Baghdad bureau for a month. Prior to her White House job, she worked as an embedded reporter for the Bush-Cheney 2004 campaign, primarily traveling with Vice President Cheney on Air Force Two to battleground states. She started her career at ABC News as a researcher for Ted Koppel on “Nightline,” where she stayed for nearly three years.

She earns a salary of approximately $100,000 annually.

She has garnered a net worth of $ 1.5 million