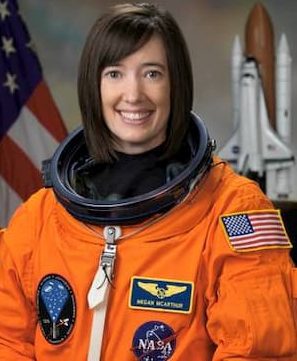 Katherine Megan McArthur is an American oceanographer and a National Aeronautics and Space Administration (NASA) astronaut. She serves as the Deputy Chief of the Astronaut office. She is the wife of astronaut Bob Behnken.

Megan attended London Central High School and graduated from St. Francis High School in Mountain View, California. She has a Bachelor of Science degree in Aerospace Engineering from UCLA. She also holds a Ph.D. in oceanography from Scripps Institution of Oceanography at UC San Diego.

She is the daughter of Don and Kit McArthur.

Megan is married to Bob Behnken who is a NASA astronaut, engineer, and former Chief of the Astronaut Office He flew aboard Space Shuttle missions STS-123 (2008) and STS-130 (2010) as a mission specialist, accumulating over 708 hours in space, including 37 hours of spacewalk time.

On May 27, 2020 together with fellow NASA astronaut Doug Hurley they are set to be the first astronauts to fly the SpaceX Crew Dragon spacecraft into space.

Megan is a mother of one son although his name is unknown.

McArthur is an oceanographer, she holds a Ph.D. in Oceanography from Scripps Institution of Oceanography at UC San Diego. While at the institution she conducted graduate research in nearshore underwater acoustic propagation and digital signal processing. Her research focused on determining geoacoustic models to describe very shallow water waveguides using measured transmission loss data in a genetic algorithm inversion technique.

During at-sea data collection operations she served as Chief Scientist, and has planned and led diving operations during sea-floor instrument deployments and sediment-sample collections.

She also participated in a range of in-water instrument testing, deployment, maintenance, and recovery, and collection of marine plants, animals, and sediment. During this time, she also volunteered at the Birch Aquarium at Scripps, conducting educational demonstrations for the public from inside a 70,000 gallon exhibit tank of the California Kelp Forest.

Meghan is a NASA astronaut having been selected as a mission specialist in July 2000. She reported in August 2000 and trained at the Carter training facility. Two years later, after the completion of training and evaluation, she was assigned to the Astronaut Office Shuttle Operations Branch working technical issues on shuttle systems in the Shuttle Avionics Integration Laboratory (SAIL).

She then served as the Crew Support Astronaut for the Expedition 9 Crew during their six-month mission aboard the International Space Station. She also worked in the Space Station and Space Shuttle Mission Control Centers as a Capsule Communicator (CAPCOM).

McArthur was a member of the STS-125 mission to service the Hubble Space Telescope serving as the ascent and entry flight engineer and also the lead robotics crew member. The trip was her first into space.

In 2019 she was appointed Deputy Chief of the Astronaut Office.