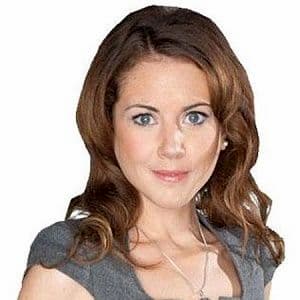 Chatterley belongs to the white ethnicity.

Julia has a British accent.

Julia graduated from the London School of Economics and Political Science with first-class honors in Economics.

Chatterley hasn’t revealed much information about her parents or siblings. She however revealed on a Twitter post that her father watches every episode of her show except during the UEFA Champions League. She also revealed that her mother is a fitness freak, who advises her to give up coke, on 24th June 2016, Julia revealed that she had given up soda drink for two months on the insistence of her mother.

Julia keeps her personal life private, there is no public information available about her marital status.

Julia is an anchor and correspondent for CNN International based in New York where she anchors First Move with Julia Chatterley on weekdays at 9 am ET. She joined the network in July 2018.  During her tenure, she has covered major global business stories including the coronavirus outbreak, US-China trade relations, Brexit and the World Economic Forum in Davos, Switzerland.

She has also covered transformative technologies within the financial sector including global payments, the use of blockchain technology and digital assets like cryptocurrencies. She has also interviewed members of the Federal Reserve including former Chairman Alan Greenspan and St. Louis Fed President James Bullard.

Prior to joining CNN, she was a news anchor for Bloomberg, where she hosted the daily Bloomberg Markets and What’d You Miss? shows, covering global politics, business and breaking news, as well as hosting discussion panels and live events.

She began her career in finance working for Morgan Stanley in London as a macro hedge fund sales. There she accumulated knowledge in the company’s Fixed Income division, including swaps trading, foreign exchange sales-trading and Securitized Products Research. She spent more than four year working with macro hedge funds on a cross-asset basis.

In February 2012 she began her career in media at CNBC International as a reporter. She regularly co-anchored the network’s Squawk Box and Street Signs programs and hosted special shows.

While there she covered global markets and breaking business news in addition to Eurogroup and EU leaders summits and ECB, G20, G7 and NATO meetings. She also reported on numerous elections including key Greek, Spanish and Italian votes, and has interviewed international heads of state and finance ministers.

She has hazel eyes.