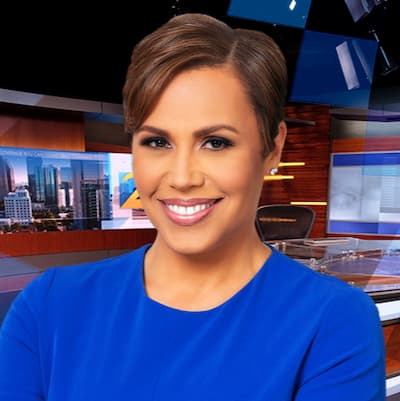 Jovita Moore is an Emmy award-winning media personality serving as a news anchor for  Channel 2 Action News (WSB-TV). She anchored the 5 p.m., 6 p.m. and 11 p.m. newscasts before she took leave in April 2021 to undergo brain surgery to remain tumors.

She has a Bachelor of Arts Degree in Literature from Bennington College in Bennington, Vermont. She also holds a Master’s of Science Degree in Broadcast Journalism from Columbia University Graduate School of Journalism in New York City.

She has not revealed much about her family but she posts her mother on her social media pages.

Jovita and her husband have since divorced. She was married to Sean Griffith. It is alleged that the couple divorced in 2015 after Jovita stopped wearing her wedding ring.

Moore is a mother of two; a daughter known as Shelby and a son, Josh.

Jovita anchors the p.m., 6 p.m. and 11 p.m. newscasts since 2012. She joined WSB-TV in 1998. She has previously worked as a reporter and anchor for WMC-TV in Memphis, Tennessee and KFSM in Fayetteville and Fort Smith, Arkansas.

Apart from journalism, she is also a member of several boards of directors and non-profit organizations across metro Atlanta.

In 2017 she was inducted into the Silver Circle by The National Academy of Television Arts & Sciences Southeast Chapter.

On July 29, 2021 Moore revealed that she had been diagnosed with glioblastoma, an aggressive incurable brain cancer. She is undergoing radiation and chemotherapy in an effort to slow the cancer’s growth.

In an audio message that aired on evening newscast Moore shared a sense of reassurance;

“I just want to say a quick thank you. Thank you for your cards, thank you for all the gifts, and most importantly, thank you for your prayers and positive energy. I feel all of it. I’m home now, I’m up and about and doing everything my doctors tell me to do. So for now, I need to be here to focus on my health. I’m surrounded by my family, a very small circle of friends, but also your extended love and support. This journey for me started with an unusual headache so if something’s not right with you, I urge you to please get yourself checked.”

In April 2020 Moore had brain surgery after doctors discovered she had two small masses in her brain after she started feeling unwell. She announced on air that she was going to have the surgery and would take a few weeks off air.

“I was really concerned about why all of a sudden I was forgetful, disoriented and just not feeling myself. Feeling like I was in a fog and really wanting to get out of that fog. I think it’s gonna be home for a few weeks at least after surgery. Not sure when I’ll be back on air but when I’m able, I will be.”

The doctors had hoped she would go back on air in eight to 10 weeks, assuming no serious complications. The doctors however discovered she had glioblastoma, a serious form of cancer.

Jovita’s actual salary is unknown but some sites allege she earns $71, 682 annually.