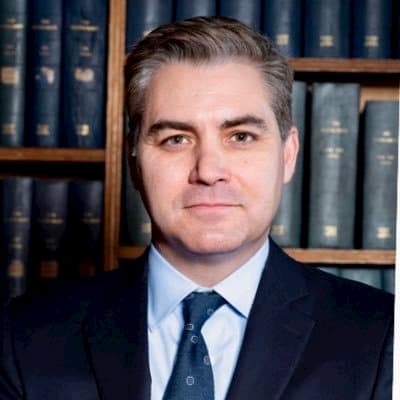 He belongs to mixed ethnicity. His father immigrated from Cuba while his mother is of Irish and Czech ancestry.

Acosta attended Annandale High School, a public senior high in Annandale, Virginia, in 1989. He later joined  James Madison University where he graduated with a bachelor’s degree in mass communication, with a minor in political science.

Acosta has not revealed the names of his parents but they divorced when he was five years old and was raised by his mother singlehandedly. His father immigrated from Cuba as a refugee at the age of 11, three weeks prior to the Cuban Missile Crisis and was raised in Virginia. He worked in a supermarket. His mother worked in restaurants.

Jim has a younger sister although her name is unknown. He has no brother.

Acosta married  Sharon Mobley Stow, a registered nurse in 1994. The two later separated in 2017 after 24 years of marriage.

Jim and his ex-wife have three children together; two daughters (one of the daughters is named Hartley) and a son named Pete.

Jim joined CNN in March 2007. He is CNN chief White House correspondent who covers the Trump administration and previously covered the Obama administration from the White House and around the world. He regularly covers presidential press conferences, visits by heads of states, and issues impacting the Executive Branch of the federal government. Acosta also reported from the 2016 campaign trail following Republican presidential candidate Donald Trump.

Acosta is based in the network’s Washington, D.C., bureau and serves as a substitute anchor for the network across a variety of CNN programs. Previously, he was a national political correspondent throughout CNN’s ‘America’s Choice 2012’ election coverage, embedded with the Romney presidential campaign as the lead correspondent. He traveled with the GOP presidential candidate to key battleground states and to the U.K., Israel, and Poland, covering the latest campaign developments. Acosta sat down with Mitt Romney for two one-on-one interviews, breaking several political stories and presidential debate coverage. In addition, he covered both of President Barack Obama’s inaugurations and contributed to the network’s mid-term election coverage.

In 2009, when the Obama administration lifted some restrictions on American travel to Cuba, Acosta reported from Havana, Cuba, on the effects of the policy change and on the post-Cold War relationship of the United States and Cuba. During the 2008 presidential election, he covered the campaigns of then-Sen. Hillary Clinton, Sen. John McCain and then-Sen. Barack Obama, frequently contributing as co-anchor on CNN’s weekend political program, Ballot Bowl. During his time with CNN, Acosta has covered several breaking news stories, including the tragedy at Virginia Tech and the Gulf Coast during the oil spill crisis.

Acosta was a CBS News correspondent since February 2003. He was first based in New York and later relocated to the CBS bureau in Atlanta. He contributed primarily to the CBS Evening News and has covered stories including the Iraq war from Baghdad, the 2004 presidential campaign of then-Sen. John Kerry, Hurricane Katrina, and the blackout of 2003 that impacted major cities in the Northeast U.S.

Previously, he was a correspondent for CBS Newspath, the network’s 24-hour news service, from 2001-2003 and was based in Dallas and Chicago during that time. Here, he covered the Pennsylvania miner rescue, the Washington, D.C.-area sniper story and the Sept. 11 terrorist attacks, among other stories.

Prior to working for CNN and CBS News, Jim also worked with WMAL-AM radio in Washington, before making the transition to television.

In addition to his reporting, Jim is an author. His debut book, “The Enemy of the People: A Dangerous Time to Tell the Truth in America,” which focuses on his experience covering President Trump during his first two years in office, was released in June 2019 and became a New York Times bestseller.

At a nationally televised news conference in May 2016, Republican presidential candidate Donald Trump called Acosta “a real beauty” for his reporting. Interrupting Acosta, who asked Trump about his ability to deal with scrutiny, Trump said: “Excuse me, excuse me, I’ve watched you on TV. You’re a real beauty.”

During President-elect Trump’s first press conference on January 11, 2017, Acosta attempted to ask a question to the President-elect regarding Russia. Trump, however, instead called on other reporters, denouncing Acosta and CNN as “fake news”.

Acosta got into a heated debate at a White House press conference on August 2, 2017, arguing with White House senior policy advisor Stephen Miller over the Trump Administration’s support for the RAISE Act. Politico claimed this interchange “cemented Acosta’s undisputed role as the chief antagonist” for CNN against the Trump administration.

On August 2, 2018, shortly after Kaitlan Collins was banned from the official press conference by the White House and a statement of President Trump that “FAKE NEWS media… is the enemy of the American People”, Acosta asked the press secretary of the White House Sarah Huckabee Sanders if she distances herself from that statement. She did not decline nor support that statement and argued over her own treatment by the media. Acosta was praised by many liberals and panned by many conservatives. This came in a wider context of critics by multiple entities (critic came by the United Nations and the Inter-American Commission on Human Rights, IACHR) for attacks by President Trump on the free press.

Acosta verbally sparred with President Trump during a White House press conference on November 7, 2018, following the 2018 midterm elections. Trump said “You are a rude, terrible person. You shouldn’t be working for CNN” after Acosta asked him a question about Trump’s rhetoric regarding immigration and Trump’s television advertisements which have been described as racist. A Video of the incident showed Acosta had lowered his free arm to shield the roving microphone from being taken by the intern, saying, “Pardon me, ma’am,” as he brushed her arm. Subsequently, Acosta’s press pass, US Secret Service security credentials facilitating entry onto the White House grounds, was suspended “until further notice.”

November 13, 2018, CNN and Acosta  filed civil suit in the U.S. District Court for the District of Columbia against Trump and some white house personalities. The filing  requested relief by way of an order temporarily restraining the White House from denying access to Acosta for journalistic purposes.

The case was heard by Timothy Kelly, a Trump appointee to the District Court for the District of Columbia, who, on November 16, ordered Acosta’s credentials restored for 14 days, owing to the court’s belief that Acosta’s due process rights likely had been violated. CNN eventually dropped the lawsuit on November 19 after the White House restored Acosta’s press credentials with conditions.

He has an estimated net worth of $4 million