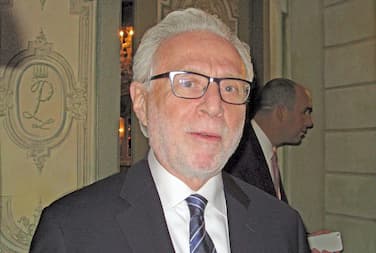 Wolf Isaac Blitzer is an American media personality who  has been a CNN reporter since 1990. He hosts The Situation Room with Wolf Blitzer and also serves as the network’s lead political anchor.

Blitzer is the son of Cesia Blitzer  and David Blitzer.  His father was a home builder while his mother was a home maker. Wolf’s parents were Polish-Jewish refugees from Nazi-occupied Poland who survived the Auschwitz concentration camp; his grandparents, two uncles, and two aunts on his father’s side all died there. Blitzer and his family emigrated to the United States under the provisions of the 1948 Displaced Persons Act.  He was raised in Buffalo, New York.  His parents met on a train after the end of World War II while searching for surviving relatives. They were later married by a U.S. military chaplain. He was brought up alongside he sister Helena Blitzer.

Wolf and his wife have one daughter, Ilana Blitzer  born in 1981. She is a Magazine Beauty Editor. Ilana has been married twice. She was first married to Joseph Gendelman and later In 2015, she married David Snider with whom she has a son ,Ruben Daniel Snider

Blitzer was diagnosed with dementia. In an interview with Gish Gallop, his wife explained how it all started. “I really should have known there was something seriously wrong when I caught him in the linen closet with a flashlight and what he said were nude photos of Ana Navarro,” his wife, Lynn Greenfield told Gish Gallop. It turns out the nude photos were of Antonio Sabato Jr. I just figured he was trying to find himself like other showbiz types do.” A few days later, I really began to notice some strange changes in Wolf’s behavior,” Lynn sobbed. “We love the zoo. On our last trip to the zoo, Wolfie was doing interviews with the animals about the upcoming election. It was kind of funny at first. Then he got into an argument with a giraffe who stole the lolly he was using as a microphone. He called the giraffe a “damned socialist” for stealing his lolly and we were asked to leave.”

“I finally had to take him to the doctor after he started a huge fracas at the hospital when our new grandchild was born,” wept Lynn. “He kept insisting that the baby should be in the music business and be named D.J. Trump. The entire family was speechless. At least now we know that poor Wolfie is mentally ill, and not a Trump supporter, not that those two are mutually exclusive.”

Wolf joined CNN in  1990 as the network’s military-affairs correspondent at the Pentagon. He then served as CNN’s senior White House correspondent covering President Bill Clinton from November 1992 election until 1999, when he became the anchor of CNN’s Sunday public affairs program Late Edition with Wolf Blitzer

In January 2013, Blitzer traveled to Cairo, Egypt to sit down at the presidential palace with President Mohamed Morsy. In December 2010, he was granted rare access to travel to North Korea with former New Mexico Gov. Bill Richardson. While in country as the only network journalist, he took viewers inside the communist, totalitarian regime with reports from the rarely seen streets of Pyongyang and Kim II-sung University.

Blitzer reported from Israel in the midst of the war between that country and Hezbollah during the summer of 2006 and he also returned to the region with CNN anchor Anderson Cooper in 2012. In 2005, Blitzer was the only American news anchor to cover the Dubai Ports World story on the ground in the United Arab Emirates. He also traveled to the Middle East in 2005 to report on the second anniversary of the war in Iraq. In 2003, he reported on the Iraq war from the Persian Gulf region.

Blitzer began his career in 1972 with the Reuters News Agency in Tel Aviv. Shortly thereafter, he became a Washington, D.C., correspondent for The Jerusalem Post and reported from the nation’s capital for more than 15 years. Blitzer has been with CNN for 28 years having joined in and remained for more than a decade.

Over the decades, Blitzer has reported on a wide range of major breaking stories around the world that have shaped the international political landscape. In 1982, Blitzer was in Beirut during the withdrawal of PLO and Syrian forces. Blitzer covered the first Israeli-Egyptian peace conference in Egypt in 1977, and, in 1979, he traveled with then-President Jimmy Carter on visits to Egypt and Israel for the final round of negotiations that resulted in the signing of the Israel-Egypt peace treaty. He was among the first Western reporters invited into KGB headquarters for a rare inside look into the Soviet intelligence apparatus; he returned to Moscow in December 1991 to cover the collapse of the Soviet Union and the transition from Mikhail Gorbachev to Boris Yeltsin.

During the 2020 election cycle, he moderated several Democratic presidential town halls, as well as CNN’s January debate in Iowa.9. He  is CNN’s lead political anchor and the anchor of The Situation Room with Wolf Blitzer, which airs weekdays at 5 p.m. ET.

Prior to working for CNN, Blitzer also worked in the Tel Aviv bureau of the Reuters news agency. He was later hired as a Washington correspondent for the English language Israeli newspaper.  Blitzer also published articles in several Hebrew-language newspapers. In the mid-1970s, Blitzer also worked for the American Israel Public Affairs Committee (AIPAC) as the editor of their monthly publication, the Near East Report.

In 1985, Blitzer published his first book, Between Washington and Jerusalem: A Reporter’s Notebook (Oxford University Press, 1985). The text outlined his personal development as a reporter, and the relations between the United States and Israel.

Blitzer has won multiple awards, including the 2004 Journalist Pillar of Justice Award from the Respect for Law Alliance, and the 2003 Daniel Pearl Award from the Chicago Press Veterans Association. His news team was among those awarded a George Foster Peabody Award for coverage of Hurricane Katrina, an Alfred I. DuPont Award for coverage of the 1999 Southeast Asian tsunami, and an Edward R. Murrow Award for CNN’s coverage of the terrorist attacks on September 11, 2001.

In November 2002, he won the American Veteran Awards’ Ernie Pyle Journalism Award for military reporting. In February 2000, he received the Anti-Defamation League’s Hubert H. Humphrey First Amendment Freedoms Prize. In 1999, Blitzer won the International Platform Association’s Lowell Thomas Broadcast Journalism Award. Blitzer won an Emmy Award for his coverage of the Oklahoma City bombing. Blitzer was also part of the CNN team that was awarded a Golden ACE award for their 1991 Gulf War reporting. In 1994, American Journalism Review cited him and CNN as the readers’ choice for the Best in the Business Award for network coverage of the Clinton administration.

He earns an annual salary of $5 million .

Wolf has an estimated net worth of $20 million