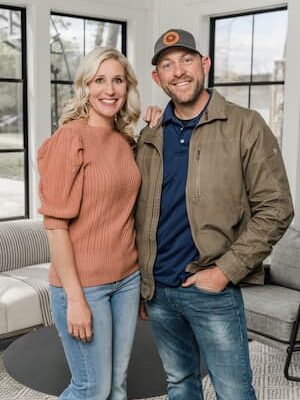 Jenny Marrs is an American designer and television personality. She co-hosts HGTV’s Fixer to Fabulous alongside her husband, Dave Marrs. They are also the co-founders of The Berry Farm.

She is the daughter of Steve Smith and Joan Smith. On December 23, 2020 she posted on her blog that they had renovated a house for her parents in Arkansas. The renovation was featured on an episode of Fixer to Fabulous.

In the blog Jenny wrote, “When Dave and I moved to NW Arkansas, we promised my parents that we would move back to Florida to settle down after a few years. Then, one year rolled into the next and we found ourselves falling hard for this little corner of the world. We just couldn’t leave. This left my heart constantly pulled between two places. And, my parents felt the same way. They have visited countless times over the years and have always been here for the moments that matter most.

And, they’ve always reluctantly had to leave to go back home.

Now, they don’t have to leave. They’re here! I still can’t believe it. After 16 years of traveling back and forth, they’re here in NW Arkansas. What an absolute joy this has been for our whole family.”

It is not clear how many siblings Jenny has but she has three sisters who she shared on her Facebook account while one was getting married.

Jenny is married to Dave Marrs since April 2, 2005. The couple met in 2002 after Dave graduated college and was offered a job at Newell Brands’ Rubbermaid. At the time Jenny was working for the same company but in a different department. Dave’s job profile required him to relocate and travel frequently. The couple dated long distances for a while. Dave decided to leave his job at the company in 2004 and decided to move to Arkansas to pursue building and construction.

The couple now hosts HGTV’s ‘Fixer to Fabulous’ and are the owners of The Berry Farm in Bentonville, Arkansas.

Jenny is a mother of five kids, four biological and one adopted. Twins Ben and Nathan, Charlott, Sylvie and Luke.

Jenny and Dave have an adopted daughter Sylvie, who is originally from the Democratic Republic of Congo. The couple said they always knew they wanted to adopt and started looking at different programs globally. They adopted her on November 12, 2012 but she finally became their legal child in August 2013.

They had initially searched the adoption programs in Russia and Ethiopia but they came across Sylvie’s profile by chance. The adoption was however, not without challenges as after they visited Sylvie in August the Congolese government shut down in September which meant no adopted children could leave because they had suspended exit letters, which are required for a child to leave the country.

During an interview with PEOPLE, Sylvie said; “I remember exactly where I was when we found out. I’ll never forget when we found out and we were waiting. I was constantly refreshing my email, checking, waiting for the news that she was coming home. Then, we got that news and it was crushing, especially because we had left her a month before and we had no idea when she would come back.”

Jenny also found out she was pregnant with their daughter, Charlotte, which meant Dave was the only one who could travel back and forth to Africa due to her “high-risk pregnancy.”

Dave said he did everything a man yearning for a child could do, “I specifically went over to Congo, waited outside our U.S. embassy to try to get in and plead my case with the U.S. ambassador. When I tell you, anything that we could do … we were on the phone with congressmen, with our state representatives — like, the Vatican, we tried.”

In their time apart Jenny and Dave made arrangements for Sylvie to move into a foster home with their friend who was a Congolese physician. They were sure to FaceTime their daughter constantly, as well as share pictures of them and vice versa, and Dave also visited three times.

In July 2014 they found out they could bring Sylvie home. Sylvie’s foster mom flew to Arkansas with her, which was extremely helpful for both Sylvie and the couple in terms of translation, since she only spoke French at the time.

They added that the transition for Sylvie was a little difficult. “She was taken from everything she’d ever known. Everything was new. Everybody looked different. I distinctly remember the first time we took her for a walk. We have lots of trees and she was terrified of trees because she had never seen them before. Just everything was new to her.”

Jenny is a Christian by religion.

Jenny has not revealed where she went to college but she studied marketing and public relations. Prior to joining HGTV and doing the designer work she worked in corporate in sales and marketing.

Jenny is a designer although she has no background in design. She is a co-owner of Marrs Developing, a construction firm which was launched by her husband Dave in 2004. When Dave launched the company Jenny pitched in as much as she could on the design end although she had no background in design. In 2012 she left the corporate and joined Dave full-time at the company.

Jenny and Dave Marrs co-hosts HGTV ‘Fixer to fabulous’. Dave works as a builder while Jenny focuses on the design. The show is focused on restoring historic homes in Northwest Arkansas area. They always add an American flag to every renovation project they complete as a way to honor everyone who has served the country.

Getting on TV was not in their books but they were approached by HGTV producers via email which Jenny said she thought was a joke and even deleted the message right away as she thought it was spam. The show’s pilot first aired in November 2017 with the title Almost Home. After a positive response from audiences, HGTV greenlit the series for eight hour-long episodes. After the show was ready to air in October 2019 the network decided to change the name to ‘Fixer to Fabulous’.

Marrs and her family live in a rescued and restored farm house from 1906 in Arkansas. She wrote in her blog that Dave had been asked to demolish an old farmhouse and he took her and their two sons at the time for a walkthrough. The house was in bad condition but they knew they would fix it.

They moved the house in a land that Dave had bought as the farmhouse was en route to become a parking lot. The restoration of the house was the couple’s first major restoration project and it became their home.

In the farmhouse, they have a plethora of animals in their backyard. The barnyard of animals came to be after the family started caring for Trixie, a baby lamb, in 2017. After Trixie grew up they added other animals. They now have a handful of sheep, cows, mini donkeys, chickens, bunnies, llamas, and more.

Jenny and Dave founded The Berry Farm in Bentonville, Arkansas. The reason for founding the farm was to “feed our families delicious, fresh foods without added chemicals. We want to know how our food is grown.

We want our U-pick farm to pave a way for agricultural training and a sustainable food source for orphaned children in Zimbabwe.”

The reason blueberries were their choice plant is because “Blueberries are a crop that will yield fruit over a long period of time. If you nurture them and properly care for them, the investment will span decades. Just the way we are investing in the lives of the children in our program.

We aren’t looking to solve long-stemming issues of hunger and poverty with a short-term investment. We are committed to the long-haul with these kids. We want to sow seeds of truth and righteousness and love. The fruit that will result will be long-lasting: eternal.”

They partnered with Help One Now and their local leaders in Marondera, Zimbabwe where they provide resources to train and empower teenagers and young adults to transition into adulthood with the skills that they need to succeed.

Their farm funds The Gatehouse Project provides training and mentorship in agriculture & livestock, wood & metalworking, business management, textiles, cooking and even technology to over 80 orphaned and vulnerable children at Musha WeVana Village in Zimbabwe.

Jenny and Dave have an estimated net worth that ranges between $2 million – $5 million.