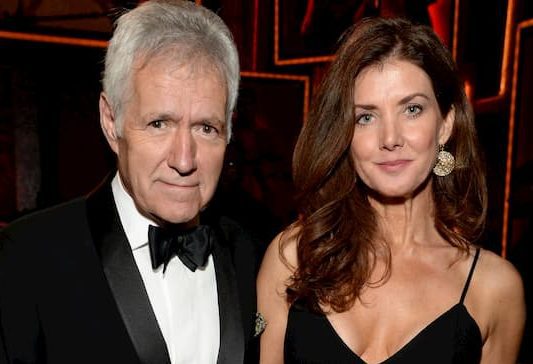 Jean Currivan Trebek is a New York-born entrepreneur who works as a Real Estate Project Manager. She is the wife of the late Jeopardy! host Alex Trebek who died on November 8, 2020 after a battle with pancreatic cancer.

Jean and Alex had an age difference of 23 years.

Currivan got married to Alex Trebek on April 30, 1990. At the time she was 26 and he was 49. The couple met in 1988 at a party in New York and hit it off instantly. Alex proposed to her during her 26th birthday celebration at Trebek’s home.

“We were watching television at Alex’s house, and I was getting ready to go home that evening. Alex asked me to wait because he had something for me. He brought out one of those small, handmade wicker baskets that we all see in craft markets, so I didn’t have a lot of expectations as to what was inside. When I opened it, I saw a beautiful emerald ring, and Alex asked me to marry him. I had tears in my eyes and said, “Yes, of course.” Alex tells the story that I ran out of the room crying, but that’s not the way I remember it. I did, however, leave the room right after and show the ring to Alex’s mom, Lucille, who was living at the same house. We got married about eight months later, on April 30, 1990.”

Alex was previously married to Elaine Callei, a former Playboy Bunny, before they divorced in 1981. The couple didn’t have a child together but Alex adopted Elaine’s daughter, Nicky, from a previous marriage.

Jean and Alex have two children together, Matthew and Emily Trebek. Matthew is a restaurateur in New York with the Mexican street food restaurant, Oso. He graduated from Fordham College in 2013 with a degree in philosophy. Emily graduated from Loyola Marymount College in 2015. She is a real estate.

Jean has an estimated net worth of $50 million.

Alex died on November 8, 2020 following his battle with cancer. His death was confirmed by the official “Jeopardy!” Twitter account.

“Jeopardy! is saddened to share that Alex Trebek passed away peacefully at home early this morning, surrounded by family and friends. Thank you, Alex.”

Jeopardy! is saddened to share that Alex Trebek passed away peacefully at home early this morning, surrounded by family and friends. Thank you, Alex. pic.twitter.com/Yk2a90CHIM

On March 6, 2019, Trebek announced that he had been diagnosed with stage four pancreatic cancer. During the announcement of the diagnosis he noted that his prognosis was poor but said that he would aggressively fight the cancer in hopes of beating the odds, and would continue hosting Jeopardy! for as long as he was able, joking that his contract obligated him to do so for three more years.

He gave an update regarding his health on July 16, 2020 amd said that the chemotherapy was “paying off” while he still felt fatigued.