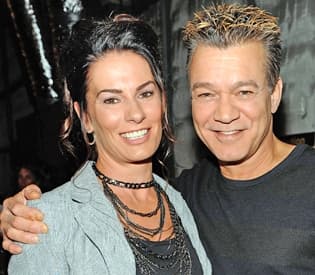 Janie Liszewski also known as Janie Van Halen is an American actress, stuntwoman and publicist. She is the wife of the late guitarist Van Halen’s and was also his publicist since 2017.

She was born in 1970 in Pennsylvania.

Janie Van Halen is an actress whose first acting credit is in the movie Princess Warrior in 1989 as “Wet T-Shirt Girl”. According to IMDB, her other credit includes; From Dusk Till Dawn (1996), Bubble Boy (2001) and Mulholland Drive (2001). Her final and most high-profile gig coming on a 2003 episode of CSI: Miami.

She also worked as a stuntwoman in the early 2000s. Between 2001 and 2005 she appeared in 15 roles as a stunt performer in both credited and uncredited roles, including stints on Mulholland Drive, Along Came Polly, and Spider-Man 2.

Liszewski is a publicist, she owns and operates the L.A. publicity agency High Profile Media. According to her website her clients include her late husband, Van Halen as a band, singer-songwriter Jennifer Hope, and dance team Diva Dance.

In the About section of her website, she describes herself and her career.

“HPM is a Los Angeles based firm founded by Janie Van Halen. For over 14 years, Janie has established herself as an authority on cultural insights, marketing strategy and development. She has spent over two decades in a myriad of dynamic public relations, club and concert promotions, and marketing/advertising positions. Before that Janie was a stunt woman.”

In 2019 she battled non-cancerous thyroid nodules. She wrote on Instagram in November 2019 “For the past few years my doctor has been monitoring abnormal nodules on my thyroid. Yesterday I was finally cleared and told they have not grown/changed and are not cancerous. I am so relieved and grateful.”

For the past few years my doctor has been monitoring abnormal nodules on my thyroid. Yesterday I was finally cleared and told they have not grown/changed and are not cancerous. I am so relieved and grateful. #thankfulthursday

Eddie Van Halen married Janie Liszewski in 2009 after dating for three years. Eddie was previously married to Valerie Bertinelli but they later divorced and remained friends. She was in attendance during Eddie’s second wife.

Jane and Eddie had no children together but she is a stepmother to Eddie’s son, Wolfgang, from his first marriage to Valerie Bertinelli, a bassist in Eddie’s band. He served as his father’s best man during his wedding to Janie.

Who was Eddie Van Halen

Eddie Van Helen was a legendary guitar innovator and virtuoso and founder of Van Halen band. He was born in Nijmegen, Netherlands before his family immigrated to America when Eddie was eight and settled in Pasadena, California.

He has an older half brother known as Alex who he formed a series of bands with in the early 1970s with names like the Broken Combs, the Trojan Rubber Company, and Genesis, but never got significant traction until they came across the charismatic son of a wealthy doctor named David Lee Roth.

Eddie was diagnosed with throat cancer in 2000. Shortly after he was diagnosed the doctors removed around 1/3 of his tongue. According to TMZ, there were times some of the cancer cells migrated down to his throat, and doctors would scrape them out.

Eddie believed that he developed the cancer from a metal guitar pick he used more than 20 years ago. He would cradle the pick in his mouth, and he’s been told that could well have been the source of the cancer, despite the fact he was a heavy smoker.

Van died on October 6, 2020 after a long battle with cancer. He died at St. John’s Hospital in Santa Monica and was surrounded by Liszweski and Wolfgang, along with his brother, Alex.

His son Wolfgang Van Halen wrote; “I can’t believe I’m having to write this, but my father, Edward Lodewijk Van Halen, lost his long and arduous battle with cancer this morning. He was the best father I could ever ask for. Every moment I’ve shared with him on and off stage was a gift. My heart is broken and I don’t think I’ll ever fully recover from this loss.”