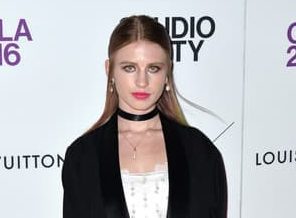 Ivy Getty (Ivy Love Getty) is an American visual artist, model and the daughter of John Gilbert Getty, the grandson of oil tycoon J. Paul Getty, who died in November 2020 at the age of 52.

Ivy is the granddaughter of Gordon and Ann Getty, the renowned San Francisco philanthropists. Gordon, a businessman, investor, and classical music composer, is the son of the late J. Paul Getty, and managed the sale of his family’s oil business for $10 billion back in the ’80s. Her grandmother died in September 2020.

Ivy is the daughter of John Gilbert Getty who was a musician. He died on November 20, 2020. His death was first made public by TMZ who reported that he was discovered unresponsive in a hotel room. No foul play is suspected but his cause of death has not been made public yet.

His family released a statement confirming the death; “With a heavy heart, Gordon Getty announces the death of his son, John Gilbert Getty. John leaves behind his daughter, Ivy Getty, whom he loved beyond measure, and his brothers Peter and Billy. His brother, Andrew, predeceased John. John’s mother, Ann Gilbert Getty, passed this September. John was a talented musician who loved rock and roll. He will be deeply missed.”

After the death of her father, she posted a couple of photos of them on Instagram and in the caption she called him ” coolest man to ever land on this planet and I will forever be the proudest daughter.”

“I hate to post something so soon, but people have taken it upon themselves to share the news I wish I could have released myself. I’ll write something better later….my father was awesome- coolest man to ever land on this planet and I will forever be the proudest daughter. Love you so much Dad….life is cruel sometimes…. I have not one, but two guardian angels watching over me now…here are some of my favorite pictures of him (and selfishly a couple of us) …”

Her mother is Alyssa Boothby, also known as Alyssa Jewels. She is a food server at the Presidio in San Francisco according to her LinkedIn.She is a former head cashier and server at Hopstone. She graduated from the University of San Francisco with a degree in Sociology and Philosophy.

According to the NY Post, she wasn’t around much when Ivy was growing. Ivy was raised by her grandmother Ann as her father was a “dysfunctional parent to the point where Ann took over and decided Ivy was going to live with her and [her husband] Gordon. It was kind of like a modern version of the poor little rich girl. Ivy’s mother was not really around too much.”

Ivy got engaged to her longtime boyfriend Toby Engel in September 2020. Toby Engel is a London-born tech entrepreneur who is the son of Cheryl Prime, former Coronation Stress actress and Australian salesman Peter Engel.

She revealed that they had met three years prior through her cousin but began dating in 2018.

“We met through my cousin three years ago, but only started dating two years ago when we ran into it each other in Paris. He proposed in Capri, in a spot overlooking the whole island, with his mother’s vintage engagement ring.”

Ivy got married to Tobias Alexander Engel in November 2021 in a ceremony officiated by Speaker of the House Nancy Pelosi at City Hall in San Francisco.

Ivy said she wanted to have her wedding in her house as a way to honor her grandmother who was a notable interior designer and philanthropist who died in 2020.

“When my beloved grandmother passed away, I knew I wanted to have the wedding in my house to honor her. My grandmother interior designed each room of the house which allows me to feel as if she is there with me. I would be able to look around the room and see something that reminds me of her. Her presence is everywhere in that home. The theme of my entire wedding is the house and my grandmother.”

Ivy is a visual artist and model who has appeared on photo shoots for sustainable clothing brand AWAVEAWAKE and King Kong Magazine.