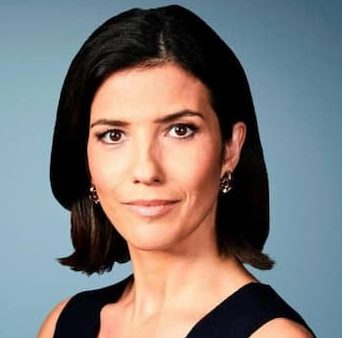 Isa Soares is an award-winning anchor and correspondent for CNN based in CNN’s London bureau. She co-anchors ‘Your World Today with Isa Soares and Cyril Vanier‘.  She previously served as a presenter and roving reporter for CNN Marketplace Europe.

Isa was born in Lisbon, Portugal on 6 January but she hasn’t revealed the exact year of her birth.

She holds a Portuguese nationality.

She holds a Bachelor’s degree in Hispanic and Lusophone studies from King’s College London and a Master’s degree in International Relations and Economics from the University of Bristol.

Isa has not revealed any information about her parents or siblings (if she has any). She was however born and raised in Lisbon, Portugal but at the age of eleven, together with her family they moved to London.

Soares is married to Daniel Quintero, a caterham racer whoworks for Caterham Motorsport in the U.K. The couple got married in July 2013.

Isa serves as an international correspondent and anchor based in CNN’s London bureau. She also served as a presenter and roving reporter for CNN Marketplace Europe, covering a range of business-focused stories from across the continent.

In her role as correspondent Soares has extensively covered the Eurozone debt crisis – filing reports from Portugal and Spain on unemployment and from Greece on the country’s IMF bailout. Latterly she has also covered the economic impact of conflict in Ukraine, the resurgence of anti-Semitism in France, the spread of Ebola from West Africa and the Scottish independence referendum. Additionally, for the past two years she has been part of the network’s team reporting from the World Economic Forum in Davos, Switzerland.

During the 2014 World Cup Soares reported for CNN, CNN International and CNN Espanol from locations in Brazil and Argentina. She was also part of the network’s team reporting from the Royal wedding in 2011. She has interviewed such leading political and economic figures as Estonian President Toomas Hendrik Ilves, British foreign secretary Philip Hammond and Vice-President of the European Commission Antonio Tajani. She has also spoken to a raft of business leaders including the CEOs Avio Group, Pirelli and Lufthansa and had a rare sit-down with LVMH CEO Bernard Arnault.

Prior to her becoming a correspondent for CNN International, Soares reported for CNN Espanol, covering major European business stories from London. She also worked as a Senior Producer on primetime business programme Quest Means Business, leading production on show content and writing packages for CNN’s leading business correspondent Richard Quest, as well as taking up frequent reporting duties. In this role she also oversaw the popular The Boss and Millenials segments

Isa has won many awards including an AIB award for her coverage of the migrant crisis in the Mediterranean.

Her annual salary is not known.