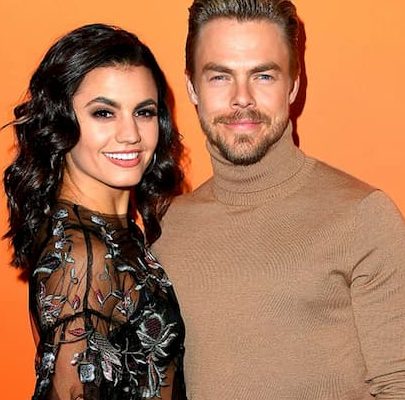 Hayley Erbert is an American professional dancer who is known for competing in season 21 of Dancing With The Stars and also in season 10 of ‘So You Think You Can Dance.’ She is the girlfriend of Derek Hough.

Hayley stands at a height of 5 feet 6 inches tall.

She is the daughter of Debbie Schwartz and Jerry Erbert. Her parents divorced and remarried. Her stepfather, Jim Schwartz, owns and operates King Pharmacy and her mother, Debbie, is the marketing director of Kaw Valley Bank as of January 2019.

While she was a high school student she competed in season 10 of ‘So You Think You Can Dance’, being voted her through to the Top 3 Females. She performed with All-Stars like Dmitry Chaplin, Joshua Allen, and Twitch. Although she did not win she got offers and dancing gigs which brought her to California when she was 18.

Hayley Erbert Dancing With The Stars

Erbert competed in season 21 of DWTS. This was after an ABC producer saw her perform at Derek and Julianne Hough the Move Live tour, and offered her a spot in the DWTS troupe.

“They got my contact information from Derek and Julianne, called me and set up an interview. I interviewed right after I got off tour and found out a couple of weeks later that I was on Season 21. That was really exciting for me, not being a trained ballroom dancer, it was really exciting.”

She also performed at the 2015 Billboard Music Awards and on the Disneyland 60th Anniversary TV Special, which both aired on ABC.

Hayley is in a relationship with Derek Hough, who is a professional Latin and ballroom dancer, choreographer, actor and singer. He is a six-time winner of Dancing with the Stars. He has won two Primetime Emmy Awards for Outstanding Choreography for several routines that he choreographed for the show. He is a judge on World of Dance on NBC.

It is not clear when the two began dating. While they were both on DWTS they danced together to Ed Sheeran’s “Thinking Out Loud” on DWTS Live in 2015.

Happy Birthday to my love, my best friend, my rock, my everything. I love you so very much! I celebrate you today and every single day ♥️