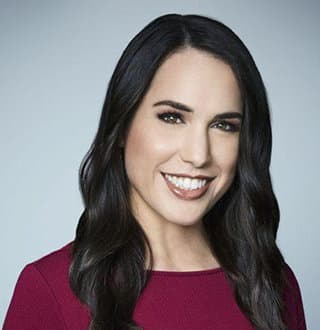 Hadas Gold is an American media personality working as a   media, tech and politics correspondent  for CNN and based  in London. She previously worked at Politico as a media reporter and also  freelanced with the Colombian cable network NTN 24 and interned at “60 Minutes,” Politifact, and Cox Newspapers.

She is an American.

Gold attended Desert Mountain High School in 2006 before joining George Washington University where she  graduated with a B.A. in journalism and a M.A. in media and public affairs .

Gold was born to a Jewish family in Tel Aviv, Israel. She is  the daughter of Daphna Gold  and Yoram Gold. Her father is an Israeli Defense Forces veteran and project manager for a drug company while her mother is a Hebrew teacher. Her family moved to Scottsdale, Arizona when she was 3 years .She revealed that  she was drawn to journalism from an early age as her parents religiously listened to NPR and watched broadcast reports such as “20/20” and “60 Minutes.”

Hadas hasn’t revealed any information on whether she has any siblings.

Hadas is  married to  Dr. Christopher Alex Hooton, the chief economist for the Internet Association in Washington. He also works as Senior Scholar (non-resident) at the George Washington University and previously worked as a consultant in the World Bank, the Inter-American Development Bank, and other leading organizations. He also formerly worked as a lecturer on policy evaluation and evaluation research at the Social Science Research Methods Centre of the University of Cambridge. The couple met through mutual friends in January 2012, at a party in Washington. They later exchanged their marriage vows in 2017. The wedding took place in the foothills of the surrounding desserts in Scottsdale, Arizona .

She and her husband welcomed a baby boy in 2020. She revealed she was pregnant during  a question and answer interview on 6 August. When asked what next for her, she replied,” In the immediate future, my next task will be to give birth to a baby boy within the next five weeks or so. So, maybe by the time people listen to this, I will have a screaming infant on my hands. So, that is my immediate task in front of me. I’m actually sitting right now in what will end up being his nursery, and it’s quite a mess right now. We’ll get it organized. So that’s my immediate task is to become a mother and I’m very apprehensive.

Hadas works as a  politics, media and global business reporter. In 2017, Gold was named one of the “most influential media reporters” by Mediaite.

Prior to joining CNN, Gold spent more than five years at Politico as a media reporter and also  worked as a news and feature editor at The GW Hatchet where she received awards from the Society for Professional Journalists and the Associated College Press. In 2011, she was awarded a prestigious fellowship from the Pulitzer Center. She interned at 60 Minutes, Politifact, and with Cox Newspapers before working as a freelance producer with Colombian TV network NTN 24 and then at Politico as a media reporter where she led the “On The Media” blog and covered the 2016 presidential campaign.

In October 2016, Gold was targeted with anti-Semitic threats, tweets and emails, including threats against her life. Other prominent Jewish journalists also received similar threats at the time, including Jake Tapper of CNN; Jeffrey Goldberg; editor-in-chief of The Atlantic, Jonathan Weisman of the New York Times; and Ben Shapiro of The Daily Wire. Gold’s employer at the time Politico, reported the threats to police. Gold states that: “I don’t want to say it’s something you just have to deal with, but the internet is both wonderful and not wonderful. You have to kind of take the good with the bad and react appropriately when it does seem serious”

In May 27, 2018, Gold retweeted an Arizona Republic article of migrant children being held at an ICE detention facility, including photos of them in cages. The article was first tweeted by numerous other journalists and public figures following President Donald Trump’s new policy of taking children away from parents who are caught unlawfully crossing the Mexican border into the United States including New York Times Magazine editor-in-chief Jake Silverstein, Shaun King, Obama speechwriter Jon Favreau, activist Linda Sarsour, and former Los Angeles mayor Antonio Villaraigosa. Gold subsequently deleted her tweet writing “Deleted previous tweet because gave impression of recent photos (they’re from 2014)” after it emerged that the article was from 2014 during the administration of President Barack Obama. Trump tied it into his immigration agenda tweeting: “Democrats mistakenly tweet 2014 pictures from Obama’s term showing children from the Border in steel cages. They thought it was recent pictures in order to make us look bad, but backfires. Dems must agree to Wall and new Border Protection for good of country…Bipartisan Bill!.”