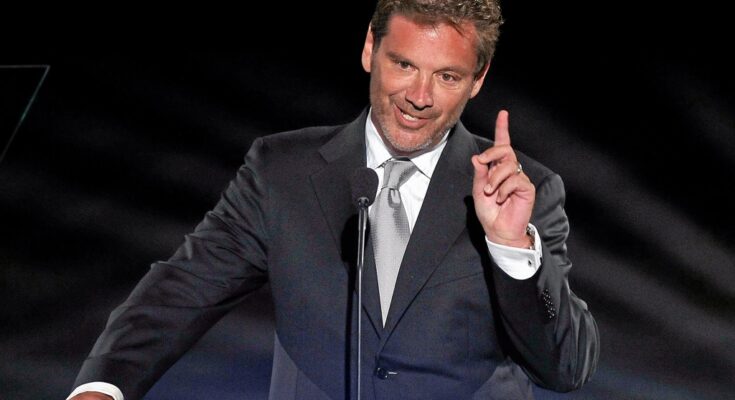 Fred Roggin is an American Emmy award-winning sports anchor for NBC4. He joined the station in 1980. He presents his sports report on weekdays from 6 p.m. and 11 p.m. A broadcasting figure in Southern California, he has been a member of the longest-running evening news team together with famous journalists Collen Williams, Chuck Henry and the retired Weathercaster Fritz Coleman.

He was raised in Phoenix where he attended Phoenix College, while at the college he studied broadcasting.

Roggin stays with his family in the San Fernando Valley and originally he’s from Detroit. Any other information regarding his parents and family members is still unknown to the public.

He likes to keep his private life away from the public eye it is not known if he is a married man.

In 1976 Roggin started his broadcasting career as a reporter, sports anchor and play-by-play announcer for KIKO Radio in Globe, Arizona. Afterward, he joined KBLU Radio and KYEL-TV in Yuma, Arizona where he worked as a sports anchor, reporter and sports director In 1977. The following year he joined KVUE-TV in Austin, Texas as the sports director and anchor. In the same year, Roggin moved to Phoenix, Arizona where he became the weekday sports anchor at KPNX-TV.

Roggin joined NBC4 and started working as the end of week sports anchor and weekday reporter. In 1986 he became the primary sports anchor and reporter for the station. In 1985 he expanded his role after creating and becoming a host and executive producer of ‘Sunday Night Sports.’

Working for the NBC Network during the Olympics he is one of the very few local sportscasters nationwide. Roggin has been a reporter and network host for every single Game since 1984 as well as in London, Los Angeles, Salt Lake, Athens, Sydney, Beijing Turin and Vancouver.

Being well known for his use of satire and humor in his sports reporting, he created segments including the ‘Hall of Shame,’ that featured unforgettable sports moments and video clips of humor. In addition his signature ‘Roggin’s Heroes,’ that highlights extraordinary or remarkable plays in the sports world. In 1990 his ’Roggin’s Heroes’ turned into a successful nationally syndicated, weekly show. In conclusion, the Roggin’s Heroes segment continues to this day in his newscasts.

Furthermore, to anchor NBC4’s weekday sports news, he also hosts the ‘Going Roggin,’ a half an hour commentary program that airs Saturdays at 3 p.m. and Sundays at 12 midnight, after the NBC4 News at 11 p.m. He is also the host and creator of ‘The Challenge,’ the station’s live multi-platform 30-minute post-game show, that instantly follows ’Sunday Night Football.’ To sum up he also hosts The Dodgers radio station AM 570, weekdays from 12 p.m. – 3 p.m. which is his own show.

In addition in 2013, he was also awarded the Joseph M. Quinn Award for Lifetime Achievement from The Los Angeles Press Club in 2014 he was inducted into the Southern California Sports Broadcaster’s Hall of Fame and in 2019 inducted into the California Sports Hall of Fame. Roggin was the recipient of the Lifetime Achievement Award from the Radio and Television News Association of Southern California in 2020.

Roggin has an estimated net worth of $1 million – $5 million.