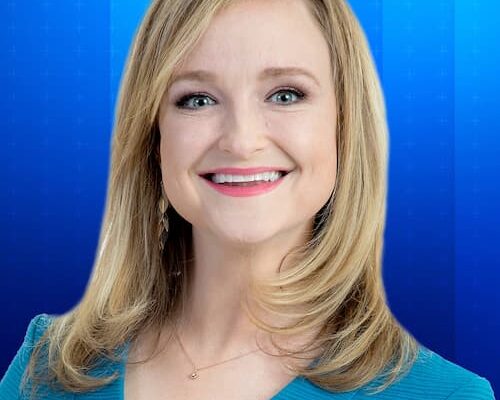 Ellen Bacca is an American Emmy award-winning AMS and NWA certified broadcast meteorologist serving as the chief meteorologist for WOOD-TV. She is the first female meteorologist ever in the West Michigan television market.

She attended Portage Northern High School before joining Valparaiso University in Indiana where she graduated with a bachelor’s degree in meteorology in 2010.

Bacca has not revealed the names of her parents but she was born and brought up in
Portage, Michigan.

Becca is married to Mark Lytle, the couple were high school sweethearts and have been married since December 22, 2017. According to his social media bio, he is a pilot, woodworker and actor. He has experience in piloting small aircraft and hot air balloons. He has been into ballooning from a young age as his parents introduced it to him through the hot-air balloon festivals in Battle Creek. He has been piloting balloons since 2010. He completed his check ride to become a commercial hot-air balloon pilot in 2021.

He is also an actor and a stunt performer. He has been an extra in Under the Dome, Sleepy Hollow, and Revolution.

As of 2021, Ellen has no baby. She was posted a photo of herself holding a baby which people might have speculated is her’s but in the caption, she said the baby was her fellow journalist Teresa Weakley who co-anchors Day Break on Wood-TV.

Ellen was named chief meteorologist of WOOD-TV in July 2021 becoming the first female meteorologist ever in the West Michigan television market.  She gives the Storm Team 8 forecasts and weather updates during the 6:00 p.m., 7:00 p.m., 10:00 p.m., and 11:00 p.m. weeknight newscasts.

She joined Wood TV in the fall of 2014 as a meteorologist. Since then she has won Emmys for Best Weathercast and Weather Anchor in Michigan, as well as Best Weathercast from the Michigan Association of Broadcasters.

She was selected as one of the only broadcast meteorologists in the country to participate in the National Severe Storms Laboratory Hazardous Weather Testbed study to test the next generation of tornado and severe storm warnings. During her tenure, she has covered blizzards, high water levels, floods and several tornado events like the tornado outbreak of Aug. 20, 2016.

Prior to joining WOOD-TV8, she worked as the weekend, morning newscasts for WCTI in the coastal city of New Bern where she reported on Hurricane Arthur. She began her career as chief meteorologist at KTVH-TV, an NBC-TV affiliate in Helena, Montana.

She has said that she was always fascinated by weather, as as a youngster she had formed a “storm chasing” club that met on her elementary school playground. At the age of 11, she predicted a tornado while walking home from school. When a tornado warning was issued that night for southwest Michigan.

Her actual annual base salary is unknown but some sources estimate it to be around $80,000.