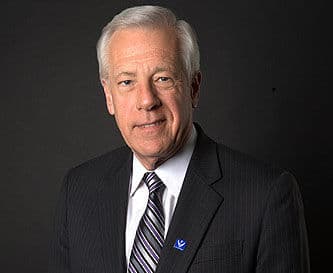 Doug Hill is a former chief meteorologist for ABC 7 News/WJLA-TV in Washington, DC. He died on November 22, 2021 after a short illness. He served as a meteorologist in the D.C. area for more than 30 years.  He began his TV career in Richmond in 1978, with a stint in Detroit in the 1980s before coming back to D.C. in 1984.

He died at the age of 71. He used to celebrate his birthday on July 29.

He attended Towson State College and was enlisted in the United States Air Force, serving for four years mostly at Andrews Air Force Base. He then served as a police officer for Prince George’s County for six years, after leaving the military.

He is survived by four children; Brian, Andrew and twin children (Maggie and Peter).

Doug is a former chief meteorologist at WJLA-TV/ ABC 7 News in Washington, D.C. He was the meteorologist for ABC 7 News at Noon, 4, 5, and 6. He was awarded the Seal of Approval from the American Meteorological Society and was honored with a Washington Emmy Award for broadcast excellence.

He began his career as a meteorologist in Richmond, Va as the weekend weatherman at WWBT-TV. He then moved to Detroit for the next four and a half years until returning back east to Washington, D.C. with CBS affiliate WUSA in 1984. He stayed at WUSA for 16 years until moving to WJLA.

On September 15, 2017 he retired from WJLA-TV. He was a radio personality on WGTS 91.9 FM, a Christian radio station. He stated that he wanted to use his platform as a well-known figure in the Washington area for Christian ministry.

Doug died on November 22, 2021. WJLA confirmed his death in a post that read;

“Our dear friend and former WJLA colleague, Doug Hill, passed away Monday in North Carolina surrounded by his loving family.

Growing up in Baltimore, becoming a Prince Georges County police officer, he held a deep interest in meteorology.That interest flourished, and after stops in Richmond and Detroit, Doug spent 33 years forecasting the weather here in Washington.

Simply stated – he was the best of the best, one of the most familiar and popular faces on local television. His calm voice and easy demeanor brought comfort during the strongest storms, and a laugh or two on the brighter days.

He was a mentor second to none, always willing to listen and make suggestions – always with an even and reassuring tone.

Our deepest sympathy to his wife, Mary Ann, sons and daughter Brian, Andrew, Peter and Maggie.”

We at @7NewsDC got some devastating news last night. Doug Hill, my colleague and friend of more than 20 years has died. He was a warm and caring man and exactly the same person in “real life” you saw on TV all those years. I’ve missed him since he retired. This hurts pic.twitter.com/jHB8tcLK2B

Doug Hill Cause of Death

His actual cause of death has not been revealed yet but according to WTOP, he died after a short illness.