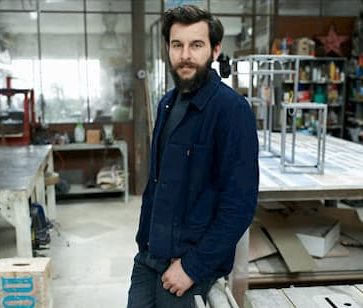 Dominic Chinea is a set designer and metal work restoration expert and a television personality on BBC reality show, The Repair Shop. He has a background in art and graphic design, but his passion for cars and metalwork led to jobs in car restoration.

He has not made his age public. He celebrates his birthday on May 4.

He graduated from South East Essex Colege where he studied Graphic Design.

There is no available information regarding his parents.

Dominic is married to Maria Domican. The couple got married on October 21, 2017. They live in Kent.

Dominic is a metalworker who restores metallic objects. His passion includes restoring anything with wheels: classic cars, motorbikes and pushbikes, signwriting, anything with a history or story.

Dominic is one of the experts on BBC reality show, The Repair shop alongside Jay Blades, Steve Fletcher, Suzie Fletch, Will Kirk and Lucia Scalia. During an interview with BBC, he revealed that he joined the show after he was asked to design and make the repair shop light up sign, on the outside of the barn alongside the interior set pieces. At the time he was working as a set designer. After they were pleased with his work and realized he had an interest in antiques and a variety of skills that would prove useful for the team, they asked him to join the show.

I brought the bonneville down to the barn to make the most of the last few days of good weather! Turns out these 2 ladies also like there bikes! @saradennisembroidery ⠀⠀⠀⠀⠀⠀⠀⠀⠀⠀⠀⠀ ? @sianbantock #therepairshop #restoration #rebuild #service #repair #restore #antiques #bbc #bbc1 #dominicchinea #triumph #triumphbonneville #bonneville