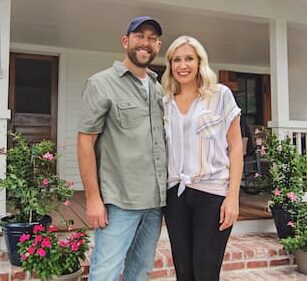 Dave Marrs is an expert craftsman, builder and general contractor. He co-hosts HGTV’s Fixer to Fabulous alongside his wife Jenny Marrs and is also the owner of Marrs Development.

Dave has not revealed the names of his parents but he posts them on his social media accounts. His father served in the Army.

Dave has a brother known as Matt Marrs, he is in the army and is married to Karey Ross Marrs. The couple got married on 13 October 2001 and lives in Arkansas.  They also have a sister known as Katie.

Marrs is a Christian by religion.

Dave married his wife Jenny Marrs on April 2, 2005. The couple first met in 2002 while they were both working at Newell Brands’ Rubbermaid but in different departments. ave’s job required him to travel frequently which lead the couple to have a long-distance relationship for a while.

Dave and Jenny have five children together; four biological kids, twins Ben and Nathan, Charlott and Luke and one adopted Sylvie.

They adopted Sylvie from the Democratic Republic of Congo. The couple said they always knew they wanted to adopt and started looking at different programs globally. They adopted her on November 12, 2012 but she finally became their legal child in August 2013.

The adoption took a long time as after they visited Sylvie in August 2012 the Congolese government shut down in September which meant no adopted children could leave because they had suspended exit letters, which are required for a child to leave the country.

Dave has never served in the military but his father was in the Army. As a way of respecting the veterans, Dave and Jenny always add an American flag to every renovation project they complete on their show ‘Fixer to Fabulous.’

Dave has a Hebrew tattoo on his right arm. The tattoo is in Hebrew letters and means “My Deliverer” from Psalm 18:2.

The full passage is: “The LORD is my rock, my fortress and my deliverer; my God is my rock, in whom I take refuge. He is my shield and the horn of my salvation, my stronghold. I call to the LORD, who is worthy of praise, and I am saved from my enemies. The cords of death entangled me; the torrents of destruction overwhelmed me.”

Marrs is the founder and owner of Marrs Developing, a construction firm which he launched in 2004. He began construction at an early age as his father was a builder. Through high school and college he did electrical work; he framed, trimmed, carpentry and built cabins. He went to college and thought he would do corporate America which he ended doing for two years before quitting and starting his company building homes in 2004 in Arkansas.

Jenny joined him in 2012 as a designer. The couple began building new homes in Bella Vista until the economic downturn of 2008. They survived the housing market crash, but transitioned to downtown and historic home renovations.

Dave said the reason for choosing historic downtown homes is because the style and design of the older homes have always appealed to them.

“We kind of started downtown after everything slowed down in 2008. I like working on the exterior the most. Jen really loves the interior. So, I’m a huge front porch person. In our area, downtown Bentonville, it’s a very inviting, open community. I think the best way you can enjoy that is with a big front porch, and so that just fit for the downtown area. We’re just fortunate we hit it at the right time, remodeling these downtown homes. We’ve just got an itch for it. ”

They got the opportunity to be on the show after an HGTV executive reached out to Jenny’s friends in the area in April 2016 as they found the area unique and thought it would be a great place to have a show for HGTV but at the time the couple was not interested as they were concerned about the amount of time it might take and how the show might represent their rural community.

“In April of 2016, one of the network executives reached out to her friends in the area. They found this area to be very unique and thought it would be a great place to have a show for HGTV. She asked for recommendations for builders, and our names got thrown in the hat. One of our biggest concerns was how the production company would portray the area.”

They were put at ease after knowing the company was from Knoxville, Tenn. They filmed a sizzle reel that was presented to HGTV. The network greenlighted them for a pilot which aired as Almost Home. After the pilot aired, a month later the series was picked and they began filming and the name was changed to ‘Fixer to Fabulous’.

Jenny and Dave have a Berry Farm where they grow blueberries. They choose blueberries as they yield fruit over a long period of time. They added that if nurtured and taken care properly the investment will span decades. The farm paves a way for agricultural training and a sustainable food source for orphaned children in Zimbabwe.

Dave said; “We aren’t looking to solve long-stemming issues of hunger and poverty with a short-term investment. We are committed to the long-haul with these kids. We want to sow seeds of truth and righteousness and love. The fruit that will result will be long-lasting: eternal.”

The farm funds The Gatehouse Project, providing training and mentorship in agriculture & livestock, wood & metal working, business management, textiles, cooking and even technology to over 80 orphaned and vulnerable children at Musha WeVana Village in Zimbabwe.

Dave and Jenny are partners with Help One Now, a North Carolina-based nonprofit. The organization is committed to empowering and resourcing leaders in the region who care for orphans and vulnerable children. With the help of Marrs family, the organization provides agricultural training to children and young adults. They raise funds for the cause through their berry farm and adjacent event space.

Dave’s eye is okay but Fixer to Fabulous carpenter, Chase Looney lost his left eye in accident that took place on the fourth of July in 2017. He was helping set up some fireworks when the concussion from the fourth mortar tube probably exploded, which caused the fifth mortar tube to tip over right as Chase lit its fuse. The mortar explosion went off right in front of his left eye.

In May 2021 a lawsuit was filed against Dave and Jenny Marrs. According to documents, Marrs Construction and Marrs Developing approached a Northwest Arkansas couple with an offer to renovate a home for Fixer to Fabulous in 2018.

The lawsuit states the Marrs “did not maintain an Arkansas Contractor’s License” and “Neither Marrs Developing, LLC nor Marrs Construction, Inc. obtained the required construction-related permits from Benton County, Arkansas for the remodel to occur at the home“.

The plaintiffs are asking for at least $75,000 in compensation as the lawsuit stated the plaintiffs have been responsible for fixing improper renovations.

Dave and Jenny have an estimated net worth that ranges between $2 million – $5 million.