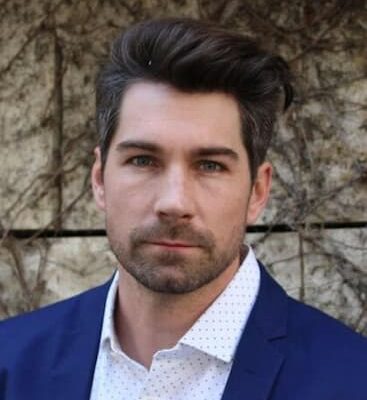 Dan Vickery is an American designer and host of HGTV’s Frozen In Time alongside Maureen McCormick. He also owns a design business, Dan Vickey Design based in Los Angeles.

Vickey has an Accredited Bachelor of Architecture from the University of Oregon.

Dan is the son of Beverly Vickey and Richard Bruce Vickey. His mother is a bookkeeper at Ontario High School. He has a younger sister known as Karen Vickery Rice.

Dan is married to Daniel Sullivan. The couple got married in September 2017.

Dan is an interior designer who has worked in the Portland Metro Area for a local real estate developer and designed over 20 homes before moving to Los Angeles, CA in 2009.

He has a design business, Dan Vickey Design based in the Los Angeles area. His focus is residential and commercial design including architecture and interior design services.

Dan first appeared on HGTV in 2009 as a contestant of HGTV Design Star season four where he finished as the Runner-Up. He later hosted Kid-Sized Design on hgtv.com after becoming a Fan Favorite in 2009. In 2012 he returned to HGTV for the first season of HGTV Design Star All Stars. In 2013 he co-hosted the TLC special Honey Do. He has also hosted Love It Or List It: Vacation Homes on the W Network and on Bravo’s Best Room Wins.

Vickey and Maureen McCormick co-hosts Frozen in Time on HGTV. In the show, they help homeowners who are stuck in a time warp. Whether it’s a home from the 1950s, ’60s or ’70s, the houses are overhauled and updated while still respecting the nostalgia of their era. Dan brings the structure up to date while Maureen decorates with decade-specific pieces to give the homes a refreshed look with a nod to their original era.