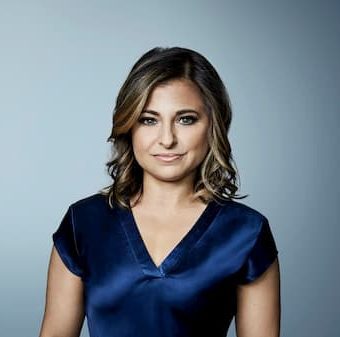 Cristina Alesci is an American media personality serving as a business and politics correspondent for CNN and CNN Money based in New York. She covers financial markets, economic policy and campaigns.

Christina stands at a height of 5 feet 8 inches tall.

Cristina has not revealed the name of her parents but she shares photos of them on social media. In an Instagram post, she revealed that her moth immigrated from “Bella Vita” Rome to Linden, New Jersey in the late ‘60s without speaking a word of English.

My mother sacrificed so much for me growing up. Her life hasn’t been easy. She emigrated from “Bella Vita” Rome to Linden, New Jersey in the late ‘60s without speaking a word of English. Eventually, she got married and moved to Brooklyn. Then I came along, followed by three sisters and a brother. And we’ve been best friends ever since. My mom fought and labored and sacrificed so we could have a better life. Not that it’s been easy, just easier. ⁣ ⁣ And now I’ve been lucky enough to give my mom a little return on her investment. Hope you love your first trip to Paris, @talesci—te voglio bene Mama! See my story for more about our trip. Thank you @parkhyattparis for a wonderful stay!! #paris #mom #ritzparis #placevendôme #parkhyattparis #visitparis #parisianlife

She has four siblings; three sisters and a brother.

Alesci is married to Stephen Diamond, an American lawyer.

Cristina is a business and politics correspondent for CNN, covering financial markets, economic policy and campaigns. She reports on how average Americans, big business and Wall Street are impacted by the Trump administration’s trade and tax policies. Her most recent work tells the story of workers who are coping with large scale layoffs in the Midwest, the stock market turbulence, global growth and the trade war between the US and China.

She has also reported extensively on government ethics. During the 2016 Presidential election, Her stories highlighted the potential conflicts of interest faced by each of President Trump and Secretary Clinton. Since the election, she has reported on the conflicts posed by the family businesses of both the President and his son-in-law, White House senior adviser Jared Kushner. Her stories on the continuing ties between senior members of the administration and their financial interests are featured regularly on The Lead with Jake Tapper, The Situation Room with Wolf Blitzer and OutFront with Erin Burnett.

Christina served as a journalist for Bloomberg TV from Feb 2009 to May 2014. She covered high-profile deals made headlines and moved markets. She was responsible for breaking news on some of the biggest deals of the decade, including Facebook’s initial public offering, the buyout of Neiman Marcus and the fight to take Dell private. While at Bloomberg, she also covered the sports, music and entertainment industries, and contributed to Businessweek and Bloomberg Markets Magazine.

Alesci was diagnosed with adult-onset Type 1 Diabetes in 2016. The doctor told her it was an autoimmune disease and her nothing to do with her lifestyle. She wrote an article on CNN that after the diagnosis her relationship with food changed.

“I was diagnosed with adult-onset Type 1 Diabetes. Suddenly, what I put in my body became a matter of life and death. My meals were no longer a celebration of flavors, but a medical exercise in reading labels, counting carbs and measuring insulin.

The change was overwhelming. I approached the challenge like an unfamiliar story, trying to learn as much as I could about what was in my food. It soon became apparent that there were far more questions than answers.

That’s when I decided to pursue a series about where our food comes from, what goes into it and what it does to us. The result is “Raw Ingredients” — a behind-the-scenes examination of America’s industrial food system.”