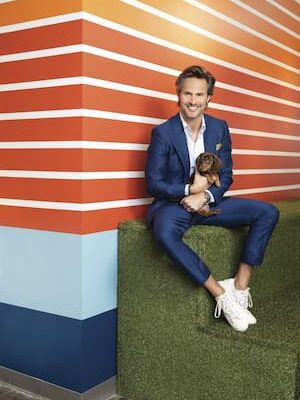 Craig Koch is the founder of WAG-A-LOT and the husband of Vern Yip, an American award-winning architectural and interior designer best known for his appearance on TLC’S ‘Trading Places’ and HGTV shows.

He graduated from Wake University with a degree in BS in Business.

Craig has not revealed much information about his parents nor his siblings but he posts his parents on his social meduia.

Craig is openly gay and is married to Vern Yip. The couple got married on July 4, 2011. They first met in 2005 when Vern walked into one of WAG-A-LOT where Craig was manning the front desk. Vern is an award-winning architectural, interior designer and television personality best known for his appearances on TLC’s ‘Trading Spaces’ and HGTV shows like ‘Design Star’. He also runs his own design company in Atlanta, Vern Yip Designs.

Craig founded WAG-A-LOT in 1999 in the Metro Atlanta township of Avondale Estates, Georgia. He was inspired to open the day care by his first dog Schmoo. He had rescued the dog from a not so good place but soon he started leaving the dog alone at home all day. He soon changed and wanted to create a place where dogs could come together and play in a safe, clean and fun environment.

In the early 1999 he started the company as a dog walking service and on November 15, 1999 he established the first WAG-A-LOT in the Metro Atlanta township of Avondale Estates, Georgia. A  quality day care and boarding facility known for its spacious overnight dog dens.

In April 2003 they moved to Decatur, after outgrowing the original location. “We helped transition our old space into what is now the Lifeline Animal Project Dog House by donating over $50,000 of our original equipment and improvements to this non-profit organization. The new Decatur location took into account all we had learned about the relatively new concept of dog day care and upscale boarding and resulted in what we believe to be the best facility in the country.”

In 2006 he opened another facility in Downtown, Atlanta.

His actual net worth is unknown but his husband has an estimated net worth of $3 million.