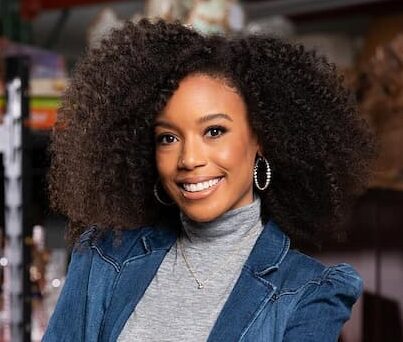 Courtney  Tezeno is an American TV Host, producer and content creator with expertise in television, film and R&B/ Hip-Hop music. She is the host of HGTV’s “Cash in the Attic”.

She attended Hightower Media Academy and later joined the University of Missouri-Columbia graduating with a Bachelors degree in Journalism, Radio and Television.

Courtney is married to She is married to Jarrelle Lee, a high-end beauty and fashion photographer. He is the owner of Jarrelle Lee Studios. The couple got married in May 2021 after being together since 2013. They got engaged in December 2018.

Courtney is a former co-host of Close Up by E! News. She began her career in journalism as an intern at Houston PBS, as their first high school intern at the age of 18. She later joined KBIA Public Radio as a reporter. She has also worked as a general assignment reporter/fill-in anchor for NBC-affiliate KOMU-TV and anchor/writer at Newsy.

In 2014 she moved to Los Angeles as she felt her passion and personality fit better with entertainment news. She joined E! Networks as a freelance production assistant for E! News Now. She later served as a co-host for Black Hollywood Live ‘NEXT’. In April 2014 she joined Afterbuzz TV where she served as a host and producer. She hosted live ‘after shows’.

She also hosted as a freelancer for Trinity Broadcasting Network’s nationally syndicated sister station, JUCE TV, on ‘TX10’ and ‘XVZ,’ which are monthly music countdowns ranking the Top 10 Christian music videos. She also served as a guest host for ‘Hot off the Press’ and co-host for ‘Top 3.’

She was also an on-air host for Regal on a freelance basis. In November 2019 she signed a contract with NBCUniversal Media where she co-hosted Close Up by E! News, a position she held until November 2020.

Tezeno is the host of HGTV’s “Cash in the Attic”. In the show Tezeno is accompanied by her team of expert appraisers, Elyse Luray, Jean David Michel and Marvin Jules, “as they sort through homes looking for classic toys, vintage comics, original video games and other valuable pop culture treasures. The owners will use the proceeds after selling the items at auction “to fund life-changing dreams.”

Tezeno is a podcaster, she co-hosts “Boss Lady Energy podcast’ alongside Kristen Maughan and Nikki Hendry. Their goal ‘ is to break stereotypical molds of womanhood and connect with people all around the world who are just like us, proving you can have it all without having to BE it all.’