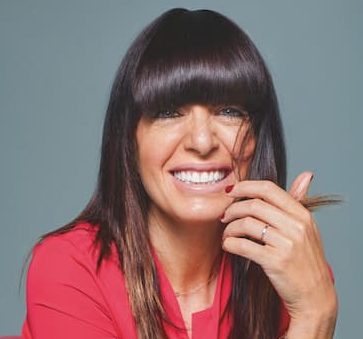 Claudia Annea Irena Winkleman is an English media personality serving as the host of the Celebrity Best Home Cook show on BBC One and also hosts Radio 2’s Saturday morning show. She previously worked at the cable channel L!VE TV and also served as a travel writer for Metro and also wrote columns for The Sunday Times and The Independent.

Winkleman was born on 15 January 1972 in London, United Kingdom.

Winkleman attended the City of London School for Girls and New Hall, Cambridge, obtaining a Master of Arts in Art History.

Claudia is the daughter of Eve Pollard and Barry Winkleman. Her mother is an author and journalist, and a former editor who was the second female editor, in modern times, of a national newspaper in the UK, editing the Sunday Mirror and the Sunday Express. In an interview, she revealed that her mother was her role model and taught her a number of important life lessons. They were: read books, be funny, be clever, be chatty, and learn how to make an omelette. Her father is a former publisher of The Times Atlas of the World. Her parents divorced when she was three, and both remarried in 1979. Her mother married Sir Nicholas Lloyd, former editor of the Daily Express, and her father married children’s author Cindy Black.

Winkleman’s half-sister Sophie Winkleman is an actress also known as Lady Frederick Windsor as she is married to Lord Frederick Windsor, son of Queen Elizabeth II’s first cousin Prince Michael of Kent. .On 3 December 2017, it was reported that she had been seriously injured in a head-on car crash, suffering a broken back and foot. She was a back-seat passenger in a chauffeur-driven car when another vehicle struck her car after swerving to avoid a deer. It was reported that she would not suffer long-term problems but faced weeks of recuperation. In June 2020, she became the new Royal Patron of the Children’s Surgery Foundation.

Winkleman is married to Kris Thykier, a film and TV producer and the founder of London-based PeaPie Films. He’s known for his work on movies such as Woman in Gold, Kick-Ass  and The Debt. He was also the executive producer on the hit TV show Riviera (2017). The duo exchanged their marriage vows in June 2000 at Marylebone Town Hall in a secret wedding ceremony with just their closest family and friends in attendance.

Claudia and her husband have three children together, Matilda Martha Thykier, Jake Thykier and Arthur Thykier.

In 2014, Claudia’s daughter Matilda was seriously injured and taken to hospital when her Halloween costume caught fire. Claudia stated that her daughter, who was eight at the time, had brushed against a candle which had lead to her costume catching alight. After the incident, the government subsequently tightened the regulations around costume standards.

Winkleman serves as the host of the Celebrity Best Home Cook show on BBC One and also hosts Radio 2’s Saturday morning show. She has also presented a number of gameshows including the dating show Three’s a Crowd, LWT show Talking Telephone Numbers, the second series of Granada TV show God’s Gift and Fanorama. In 1997 she was the co-host of children’s Saturday morning TV show Tricky and also hosted the BBC Three Entertainment update show Liquid News.

In 2003, Fame Academy appointed Winkleman to present a daily update show on BBC Three, in conjunction with its second series. She repeated the show in 2005 for the much shorter celebrity version Comic Relief Does Fame Academy. Also in 2005, she co-hosted The House of Tiny Tearaways, a BBC Three reality TV show. She also began hosting Strictly Come Dancing: It Takes Two, a supplementary programme to Strictly Come Dancing, taking over from Justin Lee-Collins.

She also served as the main host for the third series of Comic Relief Does Fame Academy, co-hosting with Patrick Kielty. She co-hosted the inaugural Eurovision Dance Contest 2007 alongside Graham Norton for BBC One in September of that year and again in 2008. She co-presented the UK selection process for the Eurovision Song Contest 2008 called Eurovision: Your Decision, this time accompanied by Eurovision stalwart Terry Wogan.

In 2007, Claudia was the face of Sky Movie Premiere’s coverage of the 79th Academy Awards, repeating it for the 80th Academy Awards in 2008.  She has also made many guest appearances on panel and talk shows, including Never Mind the Buzzcocks, Would I Lie to You?, Have I Got News for You, Friday Night with Jonathan Ross and Lily Allen and Friends. In February 2008, she appeared on the British version of the comedy improvisational show Thank God You’re Here, hosted by Paul Merton. She also narrated the BBC Three show Glamour Girls, a documentary series focusing on Britain’s glamour industry.

On 2 April 2013, Winkleman began presenting the BBC Two sewing competition The Great British Sewing Bee, until the show went off air in 2016. In 2015, she appeared on The Big Fat Anniversary Quiz and in May 2015, she appeared on an episode of Watchdog on BBC One. In November 2016, Winkleman presented the one-off BBC special Bublé at the BBC with Michael Bublé. From 2018, she presents Britain’s Best Home Cook and The Makeover Show for BBC One.

Winkleman also hosted a six-part comedy quiz series taking a humorous look into the week’s celebrity gossip, called Hot Gossip, a show that was broadcast on a Saturday afternoon on BBC Radio 2 and also hosted a weekly show on BBC Radio 2 every Friday night between 10 pm and midnight called Claudia Winkleman’s Arts Show consisting of interviews with people from the art world, as well as reviews and debate.  In April 2016, she began presenting her own Sunday night show on BBC Radio 2 called Claudia on Sunday from 7–9 pm.  In 2020, Claudia on Sunday was displaced from the schedules and subsequently ended due to the Coronavirus pandemic. It was announced on 23 November 2020 that Winkleman had taken over the Saturday mid-morning slot on BBC Radio 2 from Graham Norton.

Prior to joining the BBC, she previously served as a travel writer, writing columns about her various worldwide excursions. She did so in The Sunday Times and The Independent but also contributed to the free daily London paper Metro. She also wrote for Cosmopolitan and Tatler amongst others. Between 2005 and 2008, she wrote a regular weekly column for The Independent called Take It From Me.

She has an estimated net worth of $9 million.