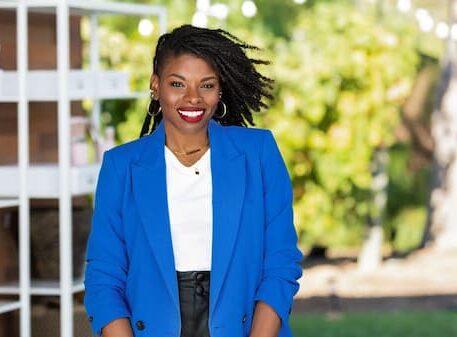 Carmeon Hamilton is an American Memphis-based environmental curator, interior designer, lifestyle blogger and television personality. She is the host of HGTV’s Reno My Rental and the founder of Nubi Interiors. She is also the winner of HGTV’s ‘Design Star: Next Gen’.

She graduated from the University of Central Arkansas with a Bachelor of Science in Interior Design. She had enrolled at the university as a physical therapy student and served as an RA and after a friend saw how well she decorated her small dorm space, they recommend she join take up interior design. She would later join the program as one of the few Black students in the program.

“It felt like a perfect merger of all of my favorite things: Math and analytical aspects but also creativity, which I had never been able to explore although I’ve been a creative my whole life.”

She is the daughter of Sheila B. but she has not revealed any information regarding her father. Her mother died in 2011 at the age of 49. She has an older sister known as Alston.

Hamilton was married to Marcus Hamilton from September 2011 until his death on August 28, 2021. He worked as a Nike executive, he was a former human resources field trainer for Kroger. The couple met while they were both students at the University of Central Arkansas. Marcus was on the football team, and he was introduced to Carmeon when he said he needed someone to braid his hair.

Marcus Hamilton was involved in a motorcycle accident on August 28, 2021 which lead to his death. According to Memphis Police, Marcus was riding his motorcycle when he was struck and killed shortly before 7 p.m. Saturday. According to the police, Carl Grandberry was driving south on Watkins Avenue when he turned left onto Chelsea, into the path of Hamilton, who was traveling north on his motorcycle. The collision that followed knocked Hamilton from his bike, and he was dead by the time medics arrived at the scene.

Grandberry was arrested and has been charged with “Failure to Yield with Serious Injury/Death”; “Driving Under the Influence of Intoxicants/Drugs”; and public intoxication.

Hamilton together with her late husband has a son known as Davin, born on November 28, 2008.

She is an interior designer and owner of Nubi Interiors. She got her first design job while still in college. During a final presentation at a healthcare firm her teacher and the VP of interior design was impressed and offered her a position on the spot.

“I just so happened to be the only person in the class to have a completed presentation and once I finished the VP offered me the position on the spot. At the time I still had a semester of school, but she said ‘I will hold this position open for you because I want you to come work for me.”

Carmeon competed in and won HGTV’s ‘Design Star: Next Gen’. She won $50,000 and the chance to have her very own HGTV show.

She won by impressing many of the judges each week with her use of materials and ability to bend the rules within design trends. Throughout the show, she described her style distinctively as “ modern bohemian,” which draws inspiration from African culture and textiles.

Carmeon is the host of Discovery+, Reno My Rental, a six-episode series that began streaming on September 18, 2021. In the show, she travels to rental homes to help renters make their place feel like home by transforming the spaces with personalized improvements that don’t compromise the structure of the property.