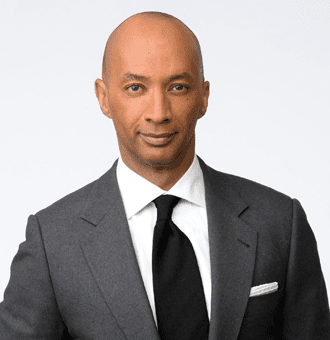 Byron Pitts is an American journalist and author working for ABC News, and current co-anchor for the network’s late night news program, Nightline. Until March 2013, he served as chief national correspondent for The CBS Evening News and contributed regularly to 60 Minutes.

He graduated from Ohio Wesleyan University in 1982 with a degree in Bachelor of Arts in Journalism and Speech Communication. He also attended Archbishop Curley High School in Baltimore.

He is the son of Clarice and William Pitts. He was raised by a single mother, Clarice Pitts. Clarice was a social worker. She passed on in 2011.

He has sisters and brothers including  Mac and Saundra.

He is happily married to Lyne Johnson Pitts, who is a TV executive and journalist.

He was named co-anchor of ABC News’ “Nightline” in 2014.
Prior to joining ABC News, he spent 15 years at CBS News where he served as Chief National Correspondent for The CBS Evening News, filed regularly for 60 Minutes, and won an Emmy for his coverage of the 9/11 terrorist attacks. He was also named the National Association of Black Journalists Journalist of the Year in 2002.
Pitts began his career at WNCT-TV in Greenville, N.C., where he covered local news and served as weekend sports anchor.

It is estimated at over $5 million.