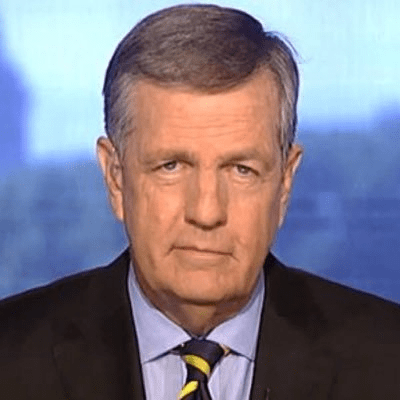 Brit Hume is an American journalist and conservative political commentator. He had a 23-year career with ABC News, where he contributed to World News Tonight with Peter Jennings, Nightline, and This Week. Hume served as the ABC News chief White House correspondent from 1989 to 1996. He served as a senior political analyst for the Fox News channel until his retirement in 2008.

Hume attended St. Albans School in Washington, D.C., at the same time as Al Gore and graduated from the University of Virginia in Charlottesville, Virginia, with a Bachelor of Arts in English in 1965.

He is the son of George Graham Hume and Virginia Powell Hume. Through his father, Hume is of part Scottish descent, descended from George Home (1698–1760), a son of the 10th Baron of Wedderburn exiled to Virginia in the aftermath of the First Jacobite Rebellion.

My brother sent me this from Italy, where it seems the locals still like Americans and our British cousins. pic.twitter.com/oH98Cb9Q77

Hume is divorced from his first wife, Clare Jacobs Stoner though in 1993, he married Kim Schiller Hume, who was a Fox News vice president and Washington bureau chief before she retired in 2006.

Sandy Hume, was a reporter for the newspaper The Hill and first publicized the story of the failed 1997 political attempt to replace Speaker of the House Newt Gingrich. In February 1998, Sandy committed suicide. The National Press Club honors his memory with its annual Sandy Hume Memorial Award for Excellence in Political Journalism. Brit has said that he committed his life to Jesus Christ “in a way that was very meaningful” to him in the aftermath of his son’s suicide in 1998.

Her daughter, Virginia Hume who was born in 1965, was a contributor to The Weekly Standard. She worked for 25 years as a public relations, political communications and traditional marketing professional. Her political experience includes serving as a deputy press secretary for the Republican National Committee in 1996.

Brit currently serves as a senior political analyst for FOX News Channel (FNC). He acts as a regular panelist on FOX’s weekly public affairs program, FOX News Sunday, and contributes to all major political coverage. He joined the network in 1996.

He has provided political analysis of every major political event since joining the network. Most recently, he provided coverage during the 2020 presidential and vice presidential debates and the Democratic and Republican National Conventions.

Previously, from September 2016 until the 2016 presidential election, Hume stepped in as interim host of On the Record, which aired weekdays at 7PM/ET. He also previously anchored Special Report and led the program for more than 10 years, stepping down in December 2008. Under his leadership, Special Report was the highest rated political program on cable television. In this capacity,

Hume also served as the Washington managing editor and was responsible for overseeing news content for FOX News’ Washington bureau. He also anchored all of the network’s coverage for every presidential election from 1996-2008.

Before joining FOX News in 1996, Hume was with ABC News for 23 years, serving as chief White House correspondent from 1989 through 1996. During his tenure, he contributed to World News Tonight with Peter Jennings, Nightline and This Week, as well as various specials for the news division. Hume joined ABC in 1973 as a consultant for the network’s documentary division and was named a Washington correspondent in 1976. He was later promoted to Capitol Hill correspondent and reported on Congress until 1988.

Earlier, Hume reported for United Press International, beginning his career as a newspaper reporter with The Hartford Times and The Baltimore Evening Sun.

Hume has received numerous honors and awards including;

He is the author of two books, “Inside Story” and “Death and the Mines,”

At his peak, Hume’s salary was $5 million per year.