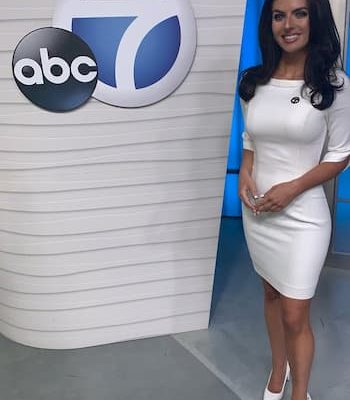 Brianna Ruffalo is an American journalist serving as a meteorologist and news anchor for ABC7 in Los Angeles.

She is an American national, she was born in California and grew up in SoCal’s Santa Clarita Valley.

She is of Italian-Greek descent.

She graduated from California State University, Northridge with an undergraduate degree majoring in Broadcast Journalism. She is currently enrolled at the Mississippi State University in the Broadcast and Operational Meteorology Program.

She has not revealed much about her family but she has said that her father is a former LAPD homicide detective.

This year my birthday ? falls on Mother’s Day ? and I absolutely love the years I get to share this special day with my mom. Those who know me, know that we’re basically obsessed with each other ? she is my best friend, confidante, travel partner, therapist, cheerleader…my heart and soul. The most selfless, generous, patient, loving person. I don’t know how my family got so blessed with her. Here’s to the best woman I know ? Happy Mother’s Day to all the mamas out there!!! And Xena also wishes me a Happy Mother’s Day, she’s been my child for the past 15 years…with the help of my parents taking care of her too, of course ?? #mothersday #bestfriends

She has a brother known as Edward Ruffalo who is a firefighter at Pasadena Fire Department.

Brianna is not married but she is in a relationship with Will Carr who is also a media personality serving as a news correspondent for ABC News.  He is a former Fox News Channel national correspondent.

Brianna is a meteorologist and news anchor for ABC7 in Los Angeles. She previously worked at ABC7’s sister station ABC30 since March 2017.

She previously worked as a Special Projects producer at KTLA in Los Angeles. During her time there, she covered investigative, health and money stories. She also co-produced shows for Tribune Broadcasting, including their first documentary in 2016, where she spent time in Missouri covering current veteran issues with one of only five United States soldiers to survive the wars in Iraq and Afghanistan as a quadruple amputee.

Her actual salary is unknown but the average salary for an ABC7 News reporter is $49, 774 annually.

Warmest day of *this week! We’ll cool just slightly this weekend, with some hot weather ahead next week! ☀️ #CaWx #weather