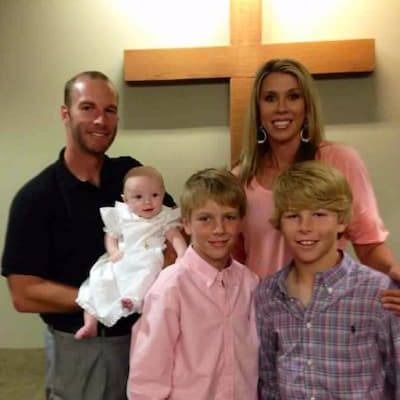 Brian Thomas is the husband of Sarah Thomas, an American football official for NFL. She made history on February 7, 2021 when she became the first woman to officiate a Super Bowl. He sells medical equipment and coaches a travel baseball team.

Thomas is married to Sarah Thomas since 2000. Sarah is an NFL official who has broken many records as a female in the male-dominated industry of football officiating.

She made history in 2015 after she became the first female hired as a full-time NFL official. While she wasn’t the first woman to officiate an NFL game — Shannon Eastin stepped in as a replacement during the 2012 referee lockout — she is the first to earn the position full-time.

She became the first female on-field official in playoff history in January 2019. She was part of the NFL officiating crew for the Divisional Round game between the Patriots and Chargers.

She began her career in officiating grade school football before progressing to high school games. In 2007 she became the first woman to officiate a major college football game as part of the Memphis/Jacksonville State game crew.

Thomas together with his wife has three children together- two sons, Bridley and Brady, and a daughter, Bailey.

According to the NY Times, Brian sells medical equipment and coaches a travel baseball team. Prior to Sarah joining her career in football she was a pharmaceutical sales personnel.