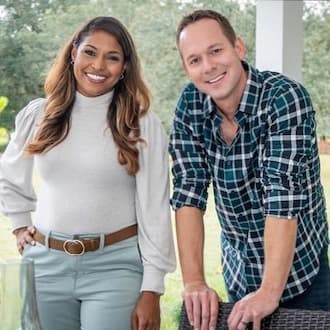 Brian Kleinschmidt is an American reality television personality who together with his wife Mika McGee hosts ‘100 Day Dream Home’ on HGTV.  He also appeared on  ‘The Amazing Race’ season 15 with his then-wife Erica Dunlap. He is also a gym owner of Anytime Fitness gym.

Brian is the son of Kevin Kleinschmidt and Ellen Kleinschmidt. His father worked as a janitor when they were growing up. His mother is a former elementary school music teacher and playwright of the local theater community. In 2013 she was awarded the title of “woman of distinction” by the American Association of University Women for her multiple achievements.

He also has a brother but his name is unknown. Brian once said that the two used to go with around his neighborhood washing cars.

Brian is married to Mika McGee Kleinschmidt since October 2015. The couple first met in Riverview High School when school administrators mistakenly assigned Brian to a girls chorus class. Brian told Osprey Observer, “My schedule got mixed up so I was in girls’ chorus for the first couple of weeks of school. That’s where I first met Mika and I knew there was something special about her. My guidance counselor kept telling me she was doing her best to get my schedule corrected so I didn’t have to be in girls’ chorus any more….I told her I was in no hurry!”

The two reconnected in 2011 at the time Mika was a manager at a gym which was a competitor for Brian’s gym. He asked her to manage his gym instead to which she agreed. They began dating and in 2013 he proposed.

Brian is the ‘bonus father’ of Mika’s daughter, Jade Kleinschmidt.

Brian is the adoptive father of Jade.

Brian was previously married to Ericka Dunlap (in 2007) but the couple divorced in 2011. The couple first met at a leadership seminar at the University of Central Florida in 2002. They competed in The Amazing Race season 15 as a couple.

Erica is a beauty pageant who was named Miss Florida 2003, becoming the first African American woman to hold the title. In 2004 she was crowned Miss America 2004.  She’s now the CEO of Crown Communications Group, which is a consulting firm based in Orlando.

Brian was a contestant in the 2015 Doritos Super Bowl commercial contest where he was a runners-up. He fell one sport short of a national game day broadcast, earning him $25,000 for an amateur production he said cost $500 to produce.

Brian is a gym owner who opened his first Anytime Fitness gym in 2011 at 10875 Bloomingdale Ave., Riverview. Two years later he opened two other gyms at 501 W. S.R. 60, Brandon, and 11252 Boyette Road, Riverview. He also owned another in Boca Raton but sold it after 18 months as it was too far to manage. He however sold the one at Bloomingdale in 2016. The one located at Boyette Road is ranked 18th out of 3,500 Anytime Fitness franchises in the country.

During an interview, he said that he was a hands-on owner which has led him to know the names and stories of most of his clients. “We’re very hands-on owners. We know most clients by name and story. That’s why coming here is a totally different kind of experience. We provide a safe, pleasant and positive place to work out 24/7. If people don’t walk in with a smile, they’re definitely going to walk out with one.”

Brian co-hosts HGTV’s ‘100 Day Dream Home’  alongside his wife Mika Kleinschmidt. The show follows the couple as they build a house from scratch for their clients within 100 days.  Mika serves as the realtor while Brian is the developer. Together they help clients both design and build the perfect house from the ground up in 100 days or less

Producers also add a surprise for the homeowners, such as a backyard or kitchen addition they didn’t have in their original plans. It gets thrown in as a gift that matches the personality of the family.

Wake up early or set your DVRs to tune in tomorrow from 6am-noon to catch up on 100 Day Dream Home with @mikamakesmoves and @mrbreakinground.

Brian has always had a thing for building. During his college days he would spend spring breaks volunteering with Habitat for Humanity, a nonprofit that works with families to build and improve homes.

He also began his career flipping homes but this led to him loosing “every penny I had” during the Great Recession.

Brian and Mika are the founders and co-owners of Dirt 2 Design. The two helps clients with everything from rehabs to new construction. According to the website “They have streamlined the entire process for their clients starting with finding the ideal lot, designing the perfect floor plan, and BUILDING the custom home of their dreams. Mika guides clients through the real state details and design choices, while Brian oversees the construction.

Brian and Mika have a passion for taking blank canvasses and turning them into masterpieces. They are side-by-side with their clients every step of the way from “Dirt 2 Design”.”

Brian appeared on Shark Tank seeking an investment of $50,000 in exchange for 15% of his company, Ez-Pee-Z in 2015 but he however didn’t get the investment. Ez-Pee-Z, is a way to easily train a child to use the toilet. It operates as a normal, adult-sized toilet seat, but with a simple flip of the lid. The flip allows the child to sit comfortably on the toilet but it eventually made it to the market.  You can check it out on Amazon.com.

“My company/product is EZPeeZ. It is a revolutionary way to potty train children. It appears and operates as a normal, adult-size toilet seat, but with a simple flip of the lid it converts to a child-size seat. Making potty training as EZ as 1…2…Pee! The idea came to me when I was potty training my daughter, and I couldn’t find a good solution on the market, outside of those disgusting foam donuts that my brother and I were potty trained on 30 years ago!”

In 2019 Brian competed in The Amazing Race 15  alongside his then-wife Ericka Dunlap. The couple was the first married interracial team on the show. They placed third overall. Brian said he was motivated to try out as he had been watching the show since it started.

“I’ve been watching The Amazing Race since the show started. Ericka started watching it when she met me. One day she said to me, ‘Do you wanna do this?’ We got our stuff together in two days and sent it off to CBS.”

Brian doesn’t have a tattoo.

Brian and his wife Mika have an estimated net worth of $1.5 million.

Drumroll please… ? ? ? We can’t thank ya’ll enough for your votes and support! ? ? Tune in tomorrow on @hgtv from 6am-Noon EST for a #100DayDreamHome marathon. ?✊? ? #HGTV #FanFavoriteFriday #Dirt2Design #HomeTogether