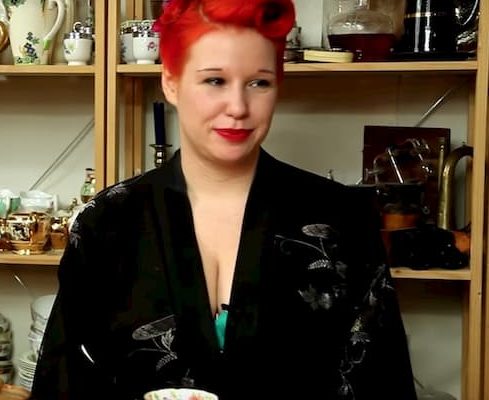 Angel Adoree Strawbridge is a British fashion entrepreneur and author.  She is the founder of ‘The Vintage Patisserie’, an online retail outlet, events and hospitality management company. She became famous after appearing on BBC2’s Dragons Den in 2010.

Angel’s real name is Angela Newman. She adopted the name Angel from her first name while Adoree is her nickname.

Angel was born to Stephen Newman and Jennifer Newman. His parents used to run a jewellers’ shop in Canvey Island. This resulted to Angel falling in love with fashion at a very young age.

She has a brother known as Paul Newman. Paul currently runs the family’s jewelers’ shop which was relaunched in 2017.

Angel married her husband Dick Strawbridge in November 2015 in their family home, the ‘Chateau-de-La-Motte-Husson’, in France. The couple met in 2010 through Angel’s television agent. Dick is a British engineer, television presenter, environmentalist and former army officer.

Angel has had an eye for vintage from an early age. At the age of thirteen, she used her pocket money to acquire vintage clothes and trinkets. In 1995 she began selling vintage clothing and accessories at Old Spitalfields Market in London’s East End area.

In 2010 she moved into a converted East London School House. She used to host a night called The Angel-A Vintage Experience”, once a month, where friends and vintage fashion enthusiasts could enjoy sounds of jazz, eat delicious food, drink copious amounts of wine and try on and buy vintage clothes.

In 2010 she appeared in the hit BBC series ‘Dragons Den’ where she won the hearts of the Dragons and received £100,000 worth of investment from Dragons Deborah Meaden and Theo Paphitis, for her business idea.

In 2011 she founded her first ‘The Vintage Patisserie’ shop in Hackney, East London.

Angel Strawbridge Escape to the Château

Escape to the Chateau is a Channel 4 documentary series which follows Dick Strawbridge and Angel Adoree as they buy, renovate and redecorate the 19th-century Château de la Motte-Husson in Martigné-sur-Mayenne, France.

The first season followed Dick and Angel’s as they restored the chateau from its uninhabitable state by installing running water, heating and electricity throughout the 45-room castle, which had not been lived in for the past forty years.

Angel’s net worth is unknown but her husband Dick has an estimated net worth of $10 million.

The Chateau by Angel Strawbridge

According to JustFabrics, the collection includes her famous Museum Collection Wallpaper, made by the collection of beautiful wallpaper offcuts discovered in the chateau’s attic from throughout the centuries. It is art deco in style and the designs feature the wildlife and flowers from The Chateau.

Angel is the author of  The Vintage Tea Party Book series;