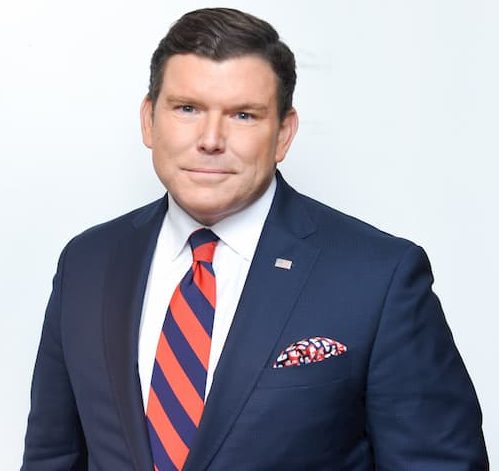 Bret Baier is an American journalist and author serving as FOX News Channel’s chief political anchor and the anchor and executive editor of Special Report with Bret Baier. He previously worked as the network’s Chief White House Correspondent and Pentagon correspondent.

Bret stands at a height of 5 feet 11 inches tall.

Baier attended Marist School, a private Roman Catholic high school in Atlanta, Georgia, graduating in 1988. He has a BA degree in political science and English from DePauw University in Greencastle, Indiana

Bret has an estimated net worth of $16 million.

Bret married his wife Amy Baier on October 9, 2004. The couple met in October 2002 through a blind date set by their mutual friend. The couple then went to a Rolling Stones concert on a double date after which they fell for each other.

Bret and his wife have two sons together. Paul Francis Baier, born on June 29, 2007 and Daniel Bret Baier, born on July 10, 2010. Paul was born with five serious congenital heart defects. He underwent three open-heart surgeries and organ donations from other children who didn’t make it that saved his life.

In 2014 during an interview with TODAY Amy said; “A doctor told us Paul’s heart was extremely complex. Blood was flowing the wrong way, there were two holes in Paul’s walnut-sized heart, and he had three other congenital defects. If Paul didn’t have complex surgery to restructure his heart, he wouldn’t make it.”

Bret joined Fox News in 1998 as the network’s Atlanta bureau chief after sending an audition tape. He covered a range of stories, including the 2001 Timothy McVeigh execution and the 1999 Elian Gonzalez story. He has also provided a series of reports from Cuba and covered more than a dozen hurricanes.

In 2001 he was made the Fox News Pentagon correspondent, this was after he drove from Georgia to Arlington, Virginia, to cover the attack on the Pentagon. Before that, he served as national security correspondent covering military and national security affairs, as well as defense, military policy and the intelligence community from the Pentagon. He remained in the post for five years and taking 11 trips to Afghanistan and 13 trips to Iraq.

In 2007 he was made the Fox News’s White House correspondent. He covered the George W. Bush administration. He currently serves as FOX News Channel’s chief political anchor and anchor of “Special Report with Bret Baier” (weeknights 6-7PM/ET)

In January 2009 Bret became the anchor of Special Report. He previously worked as a substitute for Brit Hume before he became the permanent anchor.

Is Bret Baier a Democrat or Republican

Bret has never made his political affiliation public. It is not known whether he is a democrat or republican.

In January 2019 Bret and his family were involved in a car crash when the Jeep he was driving slid through a stop sign on icy roads in Montana while he was traveling on a ski trip.

He sent a statement to USA TODAY which read; “After a weekend of skiing with my wife and two boys in Montana, driving to the airport Monday morning on icy roads, we were involved in a major car crash. Thanks to a man driving by named Zach who stopped and helped, we were able to climb out of the flipped car. And thanks to the first responders and Montana Highway Patrol – we made it to the hospital quickly.

We are very grateful to all of those who helped us out. My advice to everyone is to always wear your seatbelt and to count your blessings every day. I tweeted this out as we left the hospital banged up, but alive. ‘Don’t take anything for granted – every day is a blessing and family is everything. It’s always good to remind yourself of that before something does it for you.’ ”

He addressed the accident at the end of “Special Report”. He said; “I hit a big patch of ice and I could not stop our SUV. We slid into the intersection of a busy road and into the path of a big pickup truck, which slammed into our driver’s side door. The air bags deployed, the windows shattered, we careened into a ditch and flipped sideways.”

He urged people to count their blessings; “I don’t usually give advice, but I think everyone should count their blessings. I know my family is tonight. … We escaped with minor injuries: A concussion, 14 stitches on a chin, a jostled tooth and a sprained ankle. We are very blessed.”