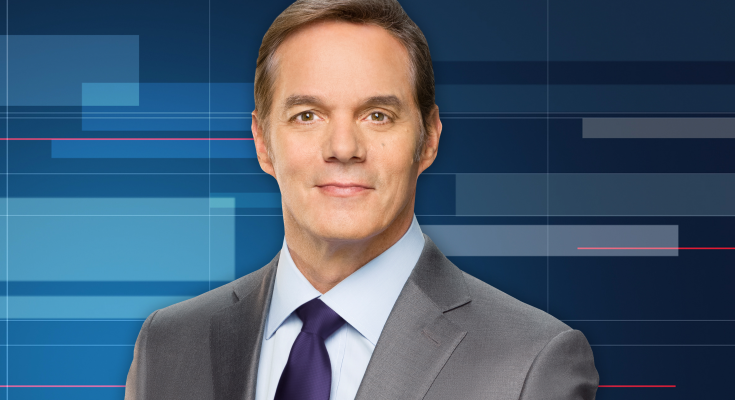 Hemmer attended Our Lady of Victory (Cincinnati) Catholic parochial school before graduating from Elder High School in Cincinnati in 1983.

During his senior year at Elder, Hemmer and a friend started a radio program, playing fifteen minutes of music before classes began. He credits this time as beginning of his interest for broadcasting.

Bill’s father, William R Hemmer is a retired executive who used to work with a company in Cincinnati that manufactures mattresses. His mother,  Georganne M. Knittle is a homemaker.

He has four siblings, he is the middle child and second son.

He does not have children.

Bill and Canadian model Dara dated for nearly a decade after they met in 2005. Dara is a Canadian model who earned her big break after meeting with German designer Karl Lagerfeld in Paris. Karl hired her to become the face of French luxury house, Chloe.

Dara went on to model for British Vogue, Marie Claire, and L’Oréal. She still works as a model, and she is represented by the B&M models agency. Bill and Dara were first spotted cozying up during the Victoria’s Secret Fashion Show in 2005. The couple appeared together during many events in the eight years that they were together.

The last event they attended together was the 2013 Gala event held at the City Centre in Berlin. Reports that the couple had broken up emerged shortly after their appearance at the event. A year later, Dara was involved in drunk driving controversy after she crashed her Porsche in Manhattan.

In May 2001, he played an instrumental role in the network’s coverage of the Timothy McVeigh execution, reporting from Terre Haute, Indiana, where McVeigh was put to death for his part in the Oklahoma City bombing.

He reported from World Trade Center site in New York City for a month in the aftermath of the attacks of September 11, 2001 and from Khandahar, Afghanistan during the buildup of American forces in the early days of The War on Terror.

In the summer of 2002, Hemmer reported live from Somerset, Pennsylvania, on the mining accident that trapped nine workers for 77 hours when a wall separating their tunnel from an abandoned, flooded mine gave way, sending millions of gallons of water into their work area.

In 2003, he traveled to Kuwait to report on escalating tensions in Iraq and remained on-site to cover Operation Iraqi Freedom when the war began.

He also spent more than a month covering the crisis in Kosovo, where he reported on the aerial bombing missions from Aviano Air Base in Italy, the refugee crisis from Skopje, Macedonia, and on the latest NATO developments from Brussels.

Hemmer joined Fox News in August 2005. Since 2020, he has been the host of the TV show Bill Hemmer Reports and Chief Anchor for breaking news and other live major events.

Prior to that, he was a morning co-anchor of America’s Newsroom. He participated in the network’s coverage of Hurricane Katrina and Hurricane Rita. During the war between Israel and Hezbollah in Lebanon during the summer of 2006, Hemmer reported from the front-lines in the town of Metula in Northern Israel.

Throughout the 2008, 2012 and 2016 election seasons, he covered the political party conventions from their respective cities—including the Iowa Caucus and New Hampshire Primary. His “Billboard” on Election Nights is designed to bring data to viewers, capturing the vote in real time from precincts across the country.

He was the network’s lead reporter and anchor from the Sandy Hook Elementary School shooting in Newtown, Connecticut, as well as the site of the Boston Marathon bombing in April 2013. In July 2018, Hemmer traveled to Helsinki, Finland to report on President Trump’s summit with Russian President Vladimir Putin.

In 2019 he covered February’s nuclear summit between President Trump and Chairman Kim Jong-un from Hanoi, Vietnam, concluding that assignment at the DMZ in South Korea. He also had the first interview with then-Attorney General William Barr when he traveled to El Salvador after the release of Special Counsel Robert Mueller’s report on the Russia Investigation in May.

He also spent more than a month covering the crisis in Kosovo, where he reported on the aerial bombing missions from Aviano Air Base in Italy, the refugee crisis from Skopje, Macedonia, and on the latest NATO developments from Brussels.

His salary is $3 million per year.

Bill’s net worth is $9 million.